First time at Alexandra Palace. Heroically strange venue. Has its own park. So, you go to the nearest Tube station and get the Special Bus.... And it really IS a special bus, by the way. Travelcards aren't valid - you pay the driver one of your Earth pounds and he leans forward, conspiratorially tapping his nose, and says, 'Free on the way back, mind.' *shudder* Why, driver? Do people... not come back?

So far that evening, I'd already been in a cafe with Yelling Cake Woman (she did actually work there - poised at the till, shouting 'LOOK! CAKE! DO YOU WANT SOME CAKE!' at everybody within earshot, which was quite a large radius). So the idea of getting on a mystery bus only made me feel even more 'Stephen Kinged' than I was already.

The approach to the venue is quite something - the bus skirts around more or less its whole perimeter so you basically feel like you're going to see this band in a castle. This, you think, is going to be epic. And yet, it doesn't work out quite like that. There is an entrance hall with Holiday Inn reception-style foliage (bad) and an illuminated 'suede' logo bouncing around the inner doors (nice). Into the next room, which opens out into Grotsville. It's like an indoor festival food court - burgers, hot dogs, and (perhaps in a nod to the more sophisticated concertgoer) a kiosk advertising 'COFFEE AND MUFFINS', which may as well have borne the subtitle 'For the less robust among you'.

It's also here I have my usual skirmish with the t-shirt stand. Most of Suede are of course rake-thin, and I suspect this also applies to the fanbase. The XL t-shirt looks like it might cover one of my arms, as though I wished to sport a 'Suede fan' glove puppet. There is no XXL. You don't get this at metal gigs, you know, where loads of us decked out in tent-sized merch stride like colossi away from the moshpit because we're too old and scared.

The actual arena itself is more of the same - literally an empty shed, apart from the sound-desk island in the centre and the bar at the back. The beautiful stained glass window - I was convinced the bands must play under this, illuminated and resplendent - is actually at the back of the hall, in darkness. I was genuinely taken aback that AP would turn out to be literally an aircraft-hangar-type venue on the inside (although, as my friend Jo explained, the building has suffered from fire damage so much over the years, you can imagine them wondering exactly what was worth reconstructing and what wasn't). 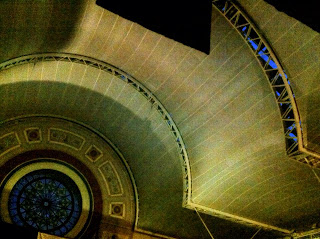 Talking of reconstructions... the band themselves have scrubbed up rather well. On stage, they behave more or less as you'd expect from any creatures on waking from hibernation: with a kind of renewed vigour, but at the same time, blinking at the bright lights.

Most of the group - which, by the way, is 'Suede Mk II', the post-Bernard Butler line-up, so they already know a thing or two about reassembling broken pieces back into a whole - are grinning as if they can't believe not just the reception they're getting, but also the fact that they have a second chance to do any of this at all. There are two exceptions: one, Neil Codling on guitar and keyboards, is extremely still and inscrutable - but then, he's also been enjoying a double life as a member of the re-activated Penguin Cafe, so I totally support any efforts on his part to look smug and/or unfussed.

Brett Anderson, meanwhile, must be drawing his energy from the national grid. In really excellent voice, he doesn't appear to stand still, well, ever, and makes a particular point of dropping off the stage to perform at 'crowd level' (slightly misguided given how vast the place is). Of course, as a more elderly onlooker, when the lead singer suddenly vanishes from view, you can spend 10 seconds thinking, 'Is it me? Is it the glasses? Am I having an episode? Is he all right? Has something happened?' - but soon enough, Anderson's head would bob up again and he'd head back to where people could actually see him.

I'm enjoying Suede's comeback overall, in fact. I liked wallowing in the really thorough reissues of the old stuff, and I'm enjoying the new record - which miiiiiight peter out towards the end slightly (like their other albums), but as it roars out of the traps it feels the equal of anything they've put out before. And the gig is punchy and up for it in the same way - their new songs feel as comfortable alongside the oldies as hopefully the scattering of new fans feel alongside, er, the oldies. We might feel like we're standing in a gasworks crossed with a cereal packet, but the sound is actually clear and satisfyingly immense. Not so young, perhaps, but electricity still present.