Flurry of activity - including seeing an all-female production of 'Henry V' and wandering around Hampton Court with a group of overseas librarians (it must have happened to you) - has kept me away from the blog for longer than I'd meant. So - *deep breath* - some catching-up to do, in the form of a few short, sharp recommendations...

I'd never heard of Anchorsong, although given that the main band were Portico Quartet, I was expecting something a bit ambient and jazzy. Not quite. Picture the scene. Compact, skinny chap, totally swamped by his hoodie, wanders onstage towards his box of tricks - so far, so normal. I was already quite encouraged by this, since I have a definite leaning towards people who loop and layer their music. But I wasn't expecting an actual string quartet to join him on stage, complete with notated music on stands.

Given that synthesised strings are common enough in dance/electronic music - just push the 'blissed out' button - this has the potential to be rather witty and fun; if you're going to have strings, why not really go for it, and get the professionals in? And so it proves - visually, it works a treat, since the players beam from ear to ear (presumably this is a bit less intense than their normal fare), and Mr Anchorsong genuinely conducts them, counting them in while he darts between his own pads and keys. Not every song is a masterpiece - his sound is like a kind of 'lounge', easy-listening techno - but the experience is totally pleasurable: the beats thunderous and the playing faultless. This old YouTube clip gives you an idea of what it was like, but I think he's best experienced live and very loud.


Portico Quartet, however, are now probably in a field of their own. A bit odd from the outset: recognisably a jazz group in their early days, improvisers with sax, drums and double bass, they always featured the exotic instrument the 'hang' over a more familiar chordal instrument like piano or guitar. This gives the music an audible sense of space. 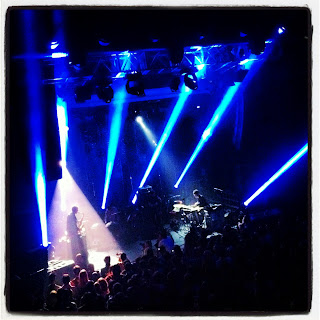 The hang looks like a wok, but sounds a bit like you'd imagine a steel drum might if you could caress rather than strike it. It lends an otherworldly, exploratory feel to the music - and no doubt it isn't a coincidence that some of their tracks have titles with a maritime or globetrotting flavour: 'Line', 'Clipper', 'Knee Deep in the North Sea'. Over time, they have introduced more electronica to the point where rhythms cross over each other in a kind of glitchy wash. It's too simplistic to say they're a 'jazz Radiohead' (i.e. come over all strange but the fans have gone with it) but they are doing their own thing, beautifully. This glorious combination of two great tracks gives you a good idea of what I was treated to for the whole gig...

Already a folk singer of some note (and apparently three previous albums, which I'll have to track down), Katy Carr underwent a kind of epiphany when she began to explore her Polish roots (on her mum's side, if I remember correctly). Her most recent record, 'Paszport', is a concept album dealing with the Polish experience during WW2, and has led her to an extraordinary style which combines elements of traditional music from both here and there. Backing KC on piano, her musicians brandished guitar, bass and - for the all-important 'oom-pah!' element - a trombone.

On stage, she more or less brought 'Paszport' to life, with projections of old footage behind her band in muted suits and - genius touch, this, I thought - she'd decked herself out in red and white. Without commenting on her 'looks' at all, the actual image she presented was amazing - statuesque, imposing and memorable. Possessed of a brilliant and sometimes breathless voice, her songs had just the right amount of exhilarating catchiness to make the anguished subject matter bearable. Brave and alluring.

I'm still a relative novice with live classical music, although I've begun to detect why I like certain ensembles and what it is I think makes me feel that way - particularly for choral music. For example, the famous Sixteen seem to have a gossamer, light sound that seems almost superhuman, angelic; while Stile Antico, the fantastic conductor-free group - who arrange themselves on stage so their voices blend and balance, and they can maintain eye contact - feel more earthy and immediate to me, somehow more 'live'.

I'd not heard Alamire before, but they'd picked some stellar 16th century composers for this programme: Byrd, Tallis, Taverner. What made me listen with new ears this time was their attention to rhythm as well as harmony. Their director, David Skinner, is a fearsomely dynamic presence and he kept the performance pacy and robust. Nothing fragile or awestruck about this music - more like awe-inspiring: God was going to bloody well sit up and listen to these songs of praise. I was also captivated by the sign-language he must have evolved with his singers, as it was clear not only how he was dictating the tempo, but also operating a kind of volume control switch, bringing singers forth out of the chorus then easing them back. Masterful.