I had never sat upstairs at the Union Chapel before. Very pleasant to not only have a terrific view of the stage but also to see the pews filling up with folk, like we were lofty spectators at some kind of unnamed vigil. 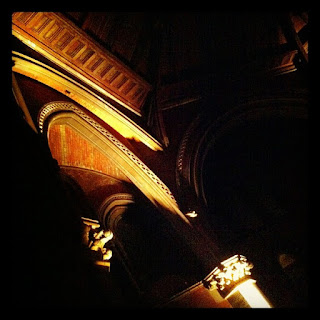 Adding to the mystery were the slightly unusual instruments littering the stage, which we soon got to hear. Sam Lee - support for Tinariwen that evening - is currently a bit of a noise in the UK folk scene. His debut album was shortlisted for the 2012 Mercury prize, and he has the good sense to walk around looking like he's just wandered out of the Strokes.

Of course, one reason he surely looks so fuzzy - as if he's slightly smudged or out of focus, such is his rangy swarthiness - is because he plays gypsy music. His particular interest seems to lie in collecting old traveller folk songs and then flinging his own unusual arrangements at them. (If I have one criticism, it would be that his song introductions - all of interest - were slightly too long, and you could occasionally feel a slight 'get on with it' vibe wobble the room.) One of my favourite songs of his involved Lee and a member of his band kneeling down and both wrapping themselves around an accordion-like instrument from India - which I believe is called a 'shruti' box - because it needed four hands for them to wrestle the sound they wanted out of it. It was impressive that Lee's voice - a rich, solemn thing - lost none of its power despite the contortions.

There was no drum kit or real percussion, and I began wondering why so many of the songs seemed to drift and warp into and out of shape. As if by magic, Lee answered my question about two songs later. He described how the songs were typically performed with a 'pulse' more than a beat, allowing, I imagine, for more freedom to slow down or speed up according to the emotions in the song. That said, he built momentum into his set as he went along, with some later numbers moving at a hell of a lick. Sound thinking, because by now, we were finally all warmed up - and don't forget, that's not easy in a venue where the toilets are half-outside. The icing on the cake was when a couple of Tinariwen came onstage with Lee to do a Gypsy-Touareg duet. They chose to perform a relatively upbeat track (apparently thrown together when they met about an hour and a half before the show started) but it made the link between the two acts of the evening clear - the quality of steady mesmerism that Lee conjures up in his near-ambient reconstructions and which Tinariwen have made their trademark with their interlocking guitar patterns and stately rhythms.

When Tinariwen take the stage in their own right, there are a few differences from how I've seen them before. There was no Ibrahim Ag Alhabib, for a start - the band's founder and figurehead, a chap with such flamboyant hair I always imagine that it needs its own tent in the desert. (There is currently major unrest and uncertainty in Mali, and this affects which members of the bands from those regions can leave and when.) Equally, I miss the Tinariwomen who would appear on some tours and add their vocal gymnastics to the mix.

Also, the band were mostly seated. I suspect this is primarily because this current tour has been billed as largely acoustic - like the most recent album, 'Tassili' - but that turns out to be a bit of mis-direction. Acoustic guitars were to the fore early on, but still underpinned by electric bass - then as the electric guitars came out, so some of the younger, more vigorous lads in the group got to their feet and punted the sound up into the steeple. The venerable Alhassane ('Hassan') Ag Touhami - who looks like your favourite kind uncle (if your favourite kind uncle was wrapped from head to toe in Touareg robes and had genius dance moves) - gets some of the loudest cheers of the night, following his ability to appear utterly modest and unassuming while playing guitar licks that scorch the aisles to the extent that you truly believe the blues must have been orginally wrenched out of the desert after all.

So, not acoustic then, but perhaps more restrained. I've seen Tinariwen gigs in the past that have ROCKED, all in upper case, like that - ROCKED. Three or four guitars, thunderous percussion, audience going nuts. This concert in the chapel was more about 'groove' - even when the odd bit of shredding was taking place (and one of the benefits of being a Toureg guitarslinger is that thanks to your headgear, you don't subject the audience to your 'guitar face' when solo-ing - take note, Jimmy Page) the sound mix favoured the bass. No-one launched themselves from their pews, but feet and shoulders were shuffling and swaying. As a result, I think this was one of my favourite T concerts so far - it seemed to point towards a future Tinariwen, who might bring a dance as well as rock crowd into the world music fold.

It's a bittersweet idea. Because of the pecularities of their travel situation, Tinariwen have always had the air of a 'collective' - the touring line-up can be as fluid as their guitar lines. But a fan like me has to wonder - the youngsters' time is coming. Will Ibrahim tour again? And *head in hands* Hassan may retire one day.

Meanwhile, the greener band members have already collaborated with folk space cadets Tunng (a few years ago now) and there's the willingness to just pitch up onstage with Sam Lee tonight to consider. Maybe they will have something more akin to fusion or folk up their sleeves next time? It'll be interesting finding out.

PS I have to finish by addressing some people directly! To Maryam - thank you so much for taking my friend Fliss and I to the concert. And to Sadaf - I feel like I've known you for some time now, so it was lovely to actually meet you at last!