Brixton Academy, earlier in the week, could not prepare me for the giddy heights of the Half Moon in Putney. On the surface, this is a comfortable, modern pub with a bright and almost airy interior. There's room to breathe, and the bar staff don't even look crestfallen when you just order a Diet Coke.

However, the pitch-dark double doors at the back only hint at the nefarious delights within - a pocket-sized venue dressed only in black and red, about to host four bands in quick succession, all with a common aim: to immerse the crowd in the sights and sounds of mod, punk and rock 'n' roll.

I'm not saying the gig was slightly nostalgic, but the bloke who organised it is called Retroman. (His nickname is 'Steve'.) Retro is a splendid chap I have the pleasure to know through Word magazine get-togethers. Giddy with excitement and unchecked love for this music (and, possibly, an ale or two), Retro comperes the evening, whipping up the crowd to even greater levels of enthusiasm, and crucially, telling the bands when they have '10 minutes left'.

For this crowd, the 'Scene' has always been here. It was a joyful sight to see the sharp attire (the men were decked out in hooped shirts, flat caps, and shirts so floral they actually started photosynthesising - while the women, as usual, looked even better in short pinafore dresses and flats) and, frankly, the willingness to simultaneously pogo and give the bands the finger as a sign of affection. Almost as if we'd put some hippies and punks in a blender - perhaps that's how this music can sound aggressive but feel inclusive: good, fast times.

The bands were all extremely enjoyable, but each one seemed to progressively add something to the night. The Legendary Grooveymen - describing themselves as 'the warm-up for the support acts' - were a burst of humour and energy, while the second band on - the Fallen Leaves - win the evening's 'I Like The Cut Of Their Jib' Award. All decked out in slightly tweedy, wobbly finery, sporting armbands with their leaf logo (all apart from the drummer, who probably thinks that any vegetation imagery is a token of weediness), they were the only quartet among a group of trios. The singer, therefore, didn't have to play anything - so had clearly perfected over time the skill of scowling at the audience as if he was about to select some slaves, and leaning nonchalantly on his microphone. He also drank from a flask of tea during one number. Strange brew indeed.

Then - and I'm sure this had something to do with the arrival of my friend Dave - the evening suddenly shifted up a gear. Main support the Past Tense powered through one monster tune after another - seek out the astonishing 'Wolfman' - I think there's a couple of versions on YouTube. This was the most successful marriage so far that night of melody and muscle. They are lucky to have one of those drummers who might be moving so fast he could be having an episode, yet every clash and pound is floor shaking and absolutely precise. The fact that (as I found afterwards) he rejoices in the name of 'Nuts' only adds to his charismatic allure.

Already influenced by Retro's matchless facility for tastemaking, I had been a fan of headliners The Len Price 3 for some time. All three of their albums zip by in a blur of ludicrously catchy riffs, wry lyrics and sunny harmonies - a good sense of Whomour. (Especially since, as you might have guessed, none of them are actually called 'Len Price'. Or '3'.) Live, they are simply immense - dressed in uniform (stripey jackets) each member still brings his own distinct physical personality to the stage show. The bass player, Steve Huggins, has no vocal mic, and lurches around, mute but grinning, like a cross between a Butlins redcoat and Boris Karloff. Drummer Neil Fromow seems to twist in all manner of contortions as he sings sky-high harmonies while beating his kit half to death. Glenn Page, lead vocal and guitar, has mastered a kind of robot-stare, idiot-dance that has him careering round the stage as if electrocuted - literally a live wire. 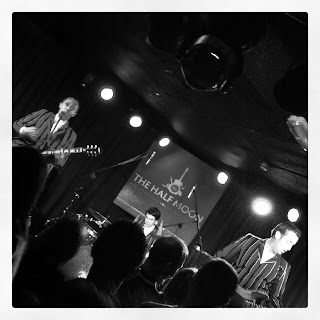 Seemingly born to play great gigs, the band weather a couple of technical hitches without batting any of their six eyelids, and succeed in combining a fantastic sound with being totally captivating to watch. And if conclusive proof were still needed of what a terrific night it was, Dave was able to buy some vinyl from the merchandise stall afterwards. As he said himself, that's a definitive hallmark of an excellent evening.

It wouldn't be the same if LP3 played Brixton Academy, but I would love the day to come when they could.

(While I'm here, an excellent way to find out more about this sort of thing would be to keep an eye on Retroman's blog. Yesterday's papers - today!)

And it was great to see you, Steve and Dave.