To the ongoing bemusement of Mrs Specs, I'm drawn to extreme music - of almost any kind. I don't mind how free my jazz is, or how grind my core. I think it's something to do with liking bands or records that demand I sit up and take notice. And I've also wondered if I'm innately resistant to thinking of any music as just 'noise' - as someone who plays a couple of instruments myself, I want to see and hear what the performers are doing and why. Is there melody, or a chord structure, or a distinct rhythm ... and if so, where is it hiding?

Swans have more of a reputation than most for 'extremity'. Led by the charismatic Michael Gira, they were mostly active first time round during the 80s and 90s. They started out as a brutal punk/noise outfit but 'mellowed' (and I mean this in a strictly relative sense) over the years - partly influenced by the arrival of Gira's female foil and equal, Jarboe - into a still-heavy rock band with more melodic, psychedelic and world elements. But throughout they never lost 'intensity' - you might be buffeted more than battered and feel more stoned and droned instead of sturm und drang - with stately, tribal percussion a particular speciality.

They were, by all accounts, terrifying on stage. Apparently, in their 'glory days', the volume of the band was such that people would be ill, need to leave - gosh, they may not have even been able to talk incessantly at the bar. Gira deliberately set out to confront and challenge - not in an entry-level shock-horror swearing and slagging off kind of way - but by dragging the audience into the cathartic, hellish vortex of the songs.

Obviously all this sounds BRILLIANT, but they jacked it in shortly before the millenium. Jarboe went solo, and remains so. Gira worked on other projects (I think the most well known is Angels of Light) but out of nowhere, it seemed, Swans suddenly reappeared in 2010. Their 'comeback' album, 'My Father Will Guide Me Up A Rope To The Sky', is not the wall-to-wall blast of sound you might expect, although review of the accompanying live shows suggested that the record was simply a launchpad for gigs every bit as coruscating as in their heyday. And the resulting follow-up record, current album 'The Seer', is scary and contrary, 2 CDs of carefully calibrated rage and despair, revolving around the breathtaking title track (which lasts for half an hour).

So here we were in London venue Koko (I was with my Swans-worshipping friend Jon, and a pal of his, Martin), waiting for them to come on. I'd fallen for the band big-time by this stage and had several of the records, but I was actually slightly apprehensive about the gig. I just desperately wanted them to sound amazing. I didn't particularly want to keel over, vomit, or have any part of my insides physically rearranged. I wanted to be blown away aesthetically, but not physically. Too old.

I needn't have worried. Yes, it was comfortably the loudest gig I've been to in about two decades (that honour previously belonged to Pixies, another band not especially keen on the definite article) and I had a bit of extra tingling in my ears the next day. But the sheer force of the sound - which could actually be felt like a draft as the wave reached one's body - was exhilirating rather than overwhelming.

I was struck by the fact that although the music was distorted - the guitars were rich in fuzz and feedback - it wasn't exactly what I would call discordant or dissonant. It was not in any way unpleasant or difficult, just colossal. You could hear riffs, and the insistent repetition made sure they entered your head and stayed there. Gira emphasised this ritualistic aspect of the performance with shamanistic gestures, encouraging the swaying, mesmerised crowd to give themselves up to the drone washing over them. That said, he was not above grinning broadly at the audience, breaking the spell by cheerfully thanking them, then - without missing a beat - launching into the next attack.

And as we might have expected from the records, the power is in the percussion. As well as a kit drummer (as in he played a drum kit, I don't think he was assembled each night backstage before the show), a second percussionist beat the crap out of all manner of hapless objects. With this long-haired, bare-chested Captain Caveman chap on stage left, through to the immobile second guitarist in the smart shirt on the right, it almost felt like the band were arranged in a kind of 'evolution of man' tableau...! 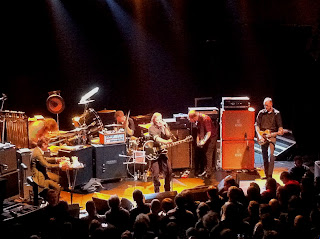 They were spectacular. Music that took you to another place, but also remembered to bring you back. It isn't for the faint-hearted, but then it wouldn't be any good for the stone-hearted either. For Gira, it's clearly necessary, some kind of outlet - and like a lot of extreme music, it's an outlet for us in the audience too. I enjoyed the overpowering (but also empowering) feeling of the sound taking me over, holding me in some kind of grip. I would see them again at every opportunity.

Grumpy PS: My only complaint is that I missed the end. Because so many Swans tracks are so long, it became clear they were going to play for well over two hours. The stage times got posted inside the venue. The support was off by 8.45, with Swans onstage from 9.15 to - wait for it - 11.50. That's right - pretty much after many last trains have left your London terminus of choice. Koko - not everyone lives in a cave next to the Tube. If the band is going to play an epic set - great. Tell people. Start the gig earlier, or if you can't bring yourself to do that, post the stage times on your website so your patrons can plan their journeys. It's not helpful just to say 'most bands finish by 11'. That's the difference between telling folk they can get home, and telling them they can't. And if someone tweets you politely to check the stage time - answer them.