Two very different gig experiences in the last couple of weeks: Diana Krall at the Royal Albert Hall, then Bellowhead at the Roundhouse. It's starting to look like I no longer go to venues with corners.

I've wanted to see Diana Krall for a long time. I go weak for several female jazz voices - among those living (!) are Claire Martin, Anita Wardell and Viktoria Tolstoy - but those women I've mentioned sing with fuzzy warmth and carefree agility. They wrap you in a towel, in a sauna, on a volcano, on the Equator. Krall is my favourite of the lot, though, and she isn't like that one bit. The sexiness of her voice comes from its drawl and depth, sultry not through heat but near-ennervation. The technique, I think, is very exact - I am willing to bet that there's massive discipline in how she breathes and projects - but the effect is as if she's finding the note and volume without making any more effort than is strictly necessary. Sometimes you could almost decide she's just speaking, were it not for the pitch and power.

(It turned out that she was actually making rather a lot of effort. Slightly huskier than usual - *faints* - she mentioned during the gig that she was getting a cold. It was, in fact, laryngitis and she ended up cancelling a couple of dates after the London shows.)

All this and she plays piano, too - again with a natural, understated style that doesn't dazzle with dizzying staccato cascades, so much as beguile with rhythmic chord progressions and shiver-down-the-spine note choices. This fits the style of the current album, 'Glad Rag Doll', particularly well - more blues and Americana flavoured than her more 'straight' jazz or bossa nova records, the production by T-Bone Burnett makes it as much a companion record to, say, the Plant/Krauss collaboration 'Raising Sand' as to any other Krall album. To establish and embellish the mood, old film footage or still photography played behind the band throughout the whole gig - interesting but sometimes a bit 'de trop', when the group themselves were all virtuosos and a happy nerd like me would've been just as happy keeping an eye on them.

For all the genius present in the ensemble, Krall played a short set-within-a-set of tunes solo at the piano and gratifyingly stole her own show. Singing Joni Mitchell's 'A Case of You', she has a voice at the halfway point between the way Mitchell sounded at the start, and the way she sounds now - the halting treatment making the song fragile, yet deathless. Overwhelmingly good.

Equally overwhelming, and equally good, were Bellowhead. For the uninitiated, Bellowhead are like a cross between a folk band and Frankenstein's monster. There are 11 of them. Four or five of them have the folk element covered - fiddles, accordion and an occasional cello. However, they have bolted on a razor-sharp, soul-template horn section. When not actually playing, the hornographers basically dance around in formation - you have to imagine you're seeing someone like Fairport Convention, but possessed by Madness. 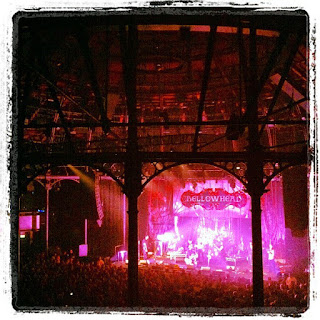 The repertoire is built around traditional songs and reels adapted for the band's small army of players. At times, you can hear some metal or funk creep in as the 'bottom end' instruments lurch in and wrestle temporary control away from the strings. What amazed this listener was that while the sound might be made up of exhilirating, swirling chaos, the band were absolutely watertight. Totally disciplined, every instrument clear in the mix (you could even hear songs 'lift' when the singer would suddenly let rip on his humble tambourine), starting, stopping and turning at every tricky time change without drifting a split-second apart from each other.

They're building a reputation for being fearsome live, and you can see and hear why. The records are joyful, intricate affairs, but on stage, it's a party. Redefining the word 'upbeat', they hold the crowd - all in various stages of 'losing it' - in the palms of their 22 hands. Appearing to play as much for themselves as anyone else - the rapport between band members is obvious, as they face each other and indulge in miniature dance routines for their own amusement - their high spirits are infectious enough to go viral through the Roundhouse audience in an instant.

Finally, a huge hello to Martin - friend of mine (through the agency of the late Word Magazine) who I bumped into at BOTH gigs! See you at the next one, M!