As you may know, I am one of the writing team on Frances Wilson's ArtMuseLondon website, where this article first appeared. For a handsome range of reviews and thought pieces covering all genres of art and music, please pay the site a visit here.
*
At last, I have now heard guitarist Xuefei Yang play live, if under somewhat unusual circumstances. I write this on a Saturday evening (20 June 2020), several hours after tuning in at 10am for this Melbourne Guitar Festival recital, and still replaying this stunning, haunting event in my mind.
We are no doubt becoming more used to online music-making during lockdown, but I’m wary of ever taking it for granted. The logistics of an occasion like this are still mind-boggling to me. Yang was performing from her home in London but timed, of course, for an Australian evening – hence the early start in the UK. It was her first-ever live stream. The concert had been publicised by the artist and the festival on ‘the socials’, just as you’d expect in the run-up to a normal gig, and rightly, we all had to buy tickets. In return, we were e-mailed a private YouTube link to fire up just before start time as we were ‘taking our seats’.
What we initially saw was a room arranged with intimate symmetry, doors to the garden forming the backdrop, and the performer’s chair flanked by guitars at the edge, as if the instruments themselves were socially distancing. There was an expectant silence, as the sound was muted while Yang warmed up off-screen. Suddenly, the audio sprang to life, and we were off.
As if in proactive defiance of lockdown, Yang had prepared a globe-trotting programme that had the happy effect of demonstrating her breathtaking versatility across so many styles. We began in Spain, with her renditions of Albeniz classics ‘Asturias’ and ‘Sevilla’. These pieces dazzle, for sure, with lightning pyrotechnics, but what was particularly brought home to me was Yang’s dexterity in creating the variations in sound. It isn’t simply about doing three things at once: it’s giving those things their own meaning and import. The bass lines were robust, forthright; the melody delicately picked; and the ‘body’ of sound in between more gossamer still, creating a shimmer running through the centre. And that’s just the right-hand… 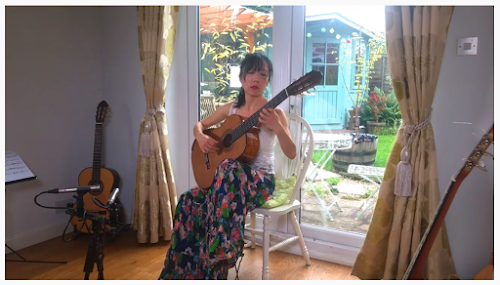 I don’t want to talk glibly of virtuosity, as if I was simply expecting it: clearly, here is one the finest classical guitarists in the world. But I am struggling to remember the last time I watched a live performance where I was aware so often of my eyes widening and my jaw dropping into textbook ‘awestruck’ mode. For example, Yang told us how ‘Koyunbaba’ by Carlo Domeniconi (an Italian composer-guitarist inspired by Turkish music) evoked the ocean coming into shore – and sure enough, there the waves were in audio form, cascades of underlying runs beneath notes that audibly glistened and sparkled like sun catching each crest. As the intensity built, Yang drew a more elemental roar from the instrument, even displaying some rock manoeuvres as her left hand flew up and down the fretboard: how this is possible while still maintaining such precision is a genuine wonder.
During the closing stages of the concert, Yang took us on a South American tour, with works from Brazil (Bonfa, Jobim), Paraguay (Barrios) and Argentina (Merlin). In a way, this was the section when I most wanted to be ‘in the room’: irresistible, swinging dance rhythms; a syncopated bassline here, a wistful melody there; flamboyant, climactic moments… we would have been surrounded by joy.
However, it’s important to note that where the online format could offer something different, Yang and the Melbourne crew were on it. During the beautiful sequence ‘Melbourne Ariosto’ (specially composed by Ross Edwards for the guitarist), we were also shown the paintings that had inspired it, by the artist Clarice Beckett.
In place of instant, audible applause, Yang read comments from the remote audience in the live chat next to the YouTube broadcast. To me, this is a fascinating development starting to emerge in online events. In a classical concert hall, constant chatter would be a nightmare – but in a web environment, it’s quite possible to exchange questions and comments without disrupting the music. I wonder if this is a virtual way that listeners are finding to put back some of the sense of community that’s missing when they aren’t physically together. It was also interesting (and encouraging) to note that the online chat seemed to settle in the same way that in-person conversation would do: falling relatively silent during the music as we were all held spellbound, then raining down applause emojis for the artist at the end of each piece.
I also found it an education. As this was part of a guitar festival, there were people watching with a depth of knowledge and interest about the tools of the trade (“What scale length was that Ramirez?”) And as Yang was able to react and respond to the comment stream, she could verify that, yes, that was a 20th fret she’d had added to her Smallman guitar by a luthier friend. She also mentioned that one of the reasons she could programme such a varied set-list was precisely because she was at home: she could use three guitars (not possible to lug them all around on tour) and have them ready in other tunings.
I could see that this event was somehow offering something outside the norm: this instant connection with the artist, even though they are more remote than ever; and the opportunity to see what she was doing, close-up, in a context that wasn’t masterclass or video tutorial, but more immediate and vibrant and, as a result, more thrilling.
As I’ve written before, I’m firmly of the belief that live performance and attendance as we all knew it before lockdown is irreplaceable: artists and audience need to come together – that’s the deal. But I don’t think that conviction means I cannot also be enthused by this online approach as an area of opportunity – artistically and commercially – and that artists can perhaps explore it as ways to supplement what I trust will be their fully-reactivated live and recording careers. It’s no substitute for true ‘live’, but it is something else. And, as someone who lives near London and is accustomed to seeing pretty much whatever live music I want, lockdown has given me a bit of an insight into how someone who might be particularly elderly, or infirm, or young, or have little disposable income, or live outside the metropolis must always experience somewhere like Wigmore Hall: either not at all, or on a stream. The future of listening also belongs to these people.
To end on a truly exciting note – Yang included two Chinese pieces in the recital, Shuhua Lou’s ‘Fisherman’s Song at Eventide’ and Changjun Xu’s ‘Sword Dance’. The latter piece is probably the one that got me hooked on her playing, as it appears on the superb CD recorded with tenor Ian Bostridge, ‘Songs from our Ancestors’, where I first heard her. The former tune was originally composed for the guzheng, a Chinese instrument with up to 21 strings, and I was struck by how Yang’s beautifully-realised transcription sounds like the modern instrument ‘backing’ the ancient one, both tones recognisable.
She has always brought Chinese music to her audiences, but performing these pieces today prompted her to announce the upcoming release of her next album, a double no less, called ‘Sketches of China’, devoted to music from her homeland. A must-listen, and an August release, so not too long to wait.
(Here is an official video of Xuefei Yang playing ‘Fisherman’s Song at Eventide’, from 2015)
Posted by Adrian at 06:55