Back in what no-one seems to be calling the ‘old normal’, I would go to quite a lot of live concerts and opera. But I would rarely chalk up five in a week. London chamber venue Wigmore Hall, with its innovative series of live lockdown broadcasts, has essentially maxed out my music diary for most of June. I now have some badly-needed structure to my working day, booking out my lunchbreak in my calendar so I can tune into the stream from 1pm, undisturbed. (So far…)

I think it’s important to say at the outset – especially with those involved in the arts, onstage and off, among the hardest hit by the crisis – that nothing is a substitute for ongoing live music/theatre in a vibrant, thriving space. I cannot imagine the stress and uncertainty of these individuals’ situations, and can only wish them all well. (And buy their recordings. And donate to causes like Help Musicians UK, of course. Let’s not overlook those options.)
But the relationship between artist and audience is a symbiotic one. We didn’t end it: we were forced apart. In routine times, musicians may strive to lay down their definitive interpretations on recordings, and listeners may seek intimate engagement with those statements on headphones at home. But for all that, the auditorium is where players become stars and listeners become fans, and that sense of communion – everyone in the room together, in that unrepeatable moment – is unique: currently, an absence most of you reading this will be all too familiar with.
So, I want as swift a return to live performance as soon as it’s safely possible. But at the same time, I think it’s worth celebrating the resourcefulness and generosity of spirit we’ve seen and heard from so many musicians under lockdown. We may find that much of it will inform and influence musical life when back out in the open.
Musicians and venues quickly began exploring the potential of isolated performance. Up in the stratosphere, this resulted in enormous undertakings like the Met Opera online gala, gathering informal at-home turns from stars of the opera firmament with relatively few glitches. But artists operating at all levels of fame and fortune went virtual: from choirs assembling themselves through separate videos, to soloists giving regular, mini-concerts from their music rooms. Some are testing the water with alternative ways of keeping busy, creative and, ideally, solvent – for example, through education and engagement (masterclasses, teaching, interviews and so on).
As a necessarily remote, but still grateful, audience member, I’ve been fascinated to see these experiments as they happen, like an industry trying to patch up its wounds in real time. Plenty of streamed performances became freely available – “we’re still here!” – but people are already used to these, even the less web-savvy, from cinema relays or DVDs. You get fantastic camera angles and beautifully mixed sound, but also they are past events, with an audience in attendance, reacting and applauding. You accept, if you like, that you are still watching a record of an event that others witnessed right in front of them, with all the atmosphere that carries with it.
With that experience temporarily unattainable, I’ve found myself concentrating on what my feelings and responses are to music made in lockdown conditions. In some respects, I think it has brought subtle changes to my listening. Two specific projects spring to mind. 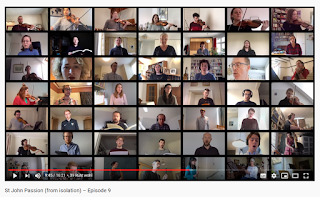 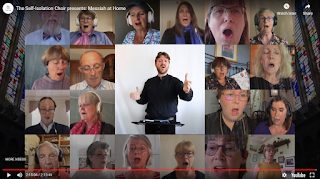 The ‘Messiah at Home’ in particular underlined this obvious fact: a choir of voices mixed with modern facilities does not sound the same as a choir in a room. The sound does not ‘warp and weft’ in the same way as it does with a directly-present conductor and subtle changes through eye contact and physical presence. But it was riveting in a different way: I became more acutely aware of vocal ‘types’; I detected more individual character in certain voices, a little more like how I imagine I’d hear it if I was in the choir, more aware of how those closest to me sounded than those further away.
Recording things miles away from each other and piecing them together is, of course, something that rock bands have been doing for years. Classical music’s main forays into this have tended to be when the piece has demanded multiple-tracking or electronic elements (for example, Reich’s ‘Electric Counterpoint’ – performed by Sean Shibe at the Wigmore last week). But vocal group Stile Antico realised that they could multiply themselves several times over into a virtual 40-strong choir to record a unique take on Tallis’s ‘Spem in alium’:
I suspect – in fact, I hope that this creativity driven by limitation will actually unleash more of the same kind of activity in the classical music world. Even after lockdown, I would love to see artists and ensembles supplement their performance income with digital recordings, possibly of works they could not actually do live… more online outreach, more use of platforms like Bandcamp, where they can engage directly with their fanbase. But back to the present…
The current Wigmore Hall series of concerts is, as far as I know, the first high-profile attempt by a classical venue to get a season of truly live, online performances up and running during lockdown (others are following in its wake). It’s worth considering what an audacious move this was. At first glance, it might seem like a pre-pandemic live stream, but of course, it’s anything but. With no audience in the hall (apart from Wigmore’s director John Gilhooly and the BBC Radio 3 presenter – in week 1, Andrew McGregor – seated on opposite sides) and the performers socially distancing from each other, there is a surreal emptiness that turns the venue into an almost sacred place. Silence following each piece.
Interesting, isn’t it? – isn’t this the silence we sometimes craved? When we get back in there, will we be so quick to make jokes or get annoyed about the mistimed clapping or epic bouts of coughing? Who knows? – But what has surprised me about the Wigmore concerts is that, while my head tells me they must have lacked atmosphere, my heart felt an ambience. And I think that’s because we were ‘there’. I’m not trying for sentiment here. With next to nobody in the room itself, we absorbed all the intensity of the performances remotely – I have rarely felt so committed, wedded to listening as to those sounds, impossibly immediate, buoyed by the Wigmore’s legendary acoustic – and nothing else.
Thousands of listeners (and viewers on the website stream) tuned into the Wigmore gigs. Many times over the number that will fit into the Hall. Many more than the viewers who are close enough to visit Wigmore regularly in person. But we all had the same experience, however strange, however new, at the same time. Critics, galvanised by the same craving for live music as the rest of us, leapt into action and filed reviews within a few hours.
The performances themselves have been sublime – hardly surprising from a roll call of pianist Stephen Hough, soprano Lucy Crowe accompanied by Anna Tilbrook, Sean Shibe playing a ‘gig of two halves’ with his acoustic and electric guitars, Nicholas Daniel on oboe accompanied by Julius Drake, and piano duets from Pavel Kolesnikov and Samson Tsoy.
[A Delphian Records video of Sean Shibe performing Reich's 'Electric Counterpoint':]
(Since this article was written, there have of course been a number of further performances. You can find all of the past concerts on the Wigmore Hall Video Library, or on BBC Sounds. Each recital goes out live on the Wigmore Live Stream, and on BBC Radio 3.)
I’m encouraged that the overall idea now seems to be gaining general – and in some cases, literal – currency. While Wigmore has scheduled these 20 concerts for free (with prompts to donate, of course), it is only right that artists and venues start monetising these events. The Royal Opera House are starting concerts for a reasonable rate – and I’m already excited about an upcoming Australian gig by guitarist Xuefei Yang – I’ve bought my ticket and I’ll be tuning in a couple of Saturdays from now, mid-morning! I think experience has now told us – if we needed convincing – that these communal events are worth having. Not because they’re a substitute for live events, but because they ‘top us up’ culturally and emotionally, while reminding us to never lose sight of the irreplaceable power of the real thing. 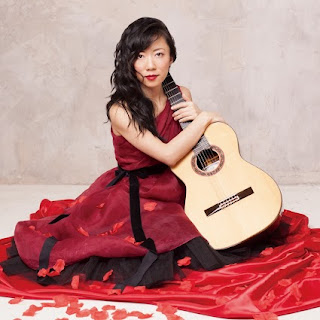 Find details and book tickets for Xuefei Yang's online concert for the Melbourne Guitar Festival here.
Posted by Adrian at 15:19