It couldn't be put off any longer. Next year - and I realise, given the extreme abnormality of this year, very little is likely to be running to schedule - we are still hoping to have some fairly major work done to the house. First-world problem ensues. Mrs Specs and I are both collectors (she: books, me: records), so the question arises... what are we going to do with all our stuff before succumbing to total upheaval?

Answer: some of it has to go. I buy too many CDs - I know that - but I've been doing so for about 35 years, from all my pocket money, Christmas & birthday vouchers back in the day, to a chunk of my disposable income now. I've made laughable attempts at weeding out before (although Mrs Specs wasn't laughing) without making the merest scratch, let alone dent, in the collection. This time, it has to be different. I need to be ruthless, unfeeling, possibly even villainous. Bordering on brutal.

And while I'm lucky enough to keep working from home full-time during this lockdown, I know I would be mad not to use a fair few of the leisure hours I've been unceremoniously handed back (when I'd normally be out hearing live music, dagnammit) to try and break the back of this heroic task.

Burying myself deep in the spare room, I began trying to determine what I could do without. Predictably, sifting through my albums is like sifting through my past, but I wasn't fully prepared for the headlong journey I'd be taking into the recesses of my mind...

I might have been a weirder teenager than I thought I was.
Before starting the Sifting, my memory of my 'young' listening seemed perfectly in tandem with what all of my mates were playing as well. We all had our favourite chart bands as kids (mine was Ultravox), we all started listening to John Peel and earning our indie stripes at around the same time, then broadened our horizons at university or during early adulthood and beyond.

My old CDs, though, are telling a somewhat different story. Genesis. So much Genesis. In fact, my first gig was when I won tickets to see them at Wembley Stadium. I realise they had become, in essence, a pop band by then, but I had the old stuff as well.

I absolutely love prog now - I listen to loads of prog, I buy 'Prog' magazine and if I could, I'd wear prog socks - but I had no coherent recollection of quite how long it had been my companion. Marillion. Sky. Pink Floyd. And sometimes, beware children, proggers come in disguise. Supertramp. XTC.

I very much belong to the 'there are no guilty pleasures' camp, and I find no shame in listening to anything I want to listen to - then or now. Prog rock has its detractors, people who still think it's all about capes and goblins (as if that would be a bad thing). But in fact, it's a thriving, vital scene at the moment and its current appeal to me seems obvious: now I've been a serious devotee of classical music for around a decade, it stands to reason I would also like rock or folk music that stretches out, aims for virtuosity and intricacy, insists on holding the attention.

But the discs nestling at the back of my shelves reveal that this type of music exerted a pull on me from the outset. Ironically, when I became totally hooked on classical (without actually owning any Hooked On Classics), the genre that instantly connected with me was art song, where the composer often conveys their intention in a mere two or three minutes, rather more the length of a pop hit.

So I have a deep-seated love for rock music that strives to feel classical, and classical music that has the same effect on me as rock. It's sheer good fortune I've turned out as well as I have.

I'm definitely artist-led.
This must also be a legacy of my pop and rock years. I am much more likely to go where a certain artist takes me, than home in on a genre, type or period of music... or even a particular composer. I do have a favourite composer - Schubert (see below) - but I still don't obsessively collect his entire body of work in its own right.

I have some historical, famous recordings of great works - versions you are 'supposed' to own - but as a rule, I don't play them very often. I know that some of them will become casualties of the Sifting. The ones I always go back to are mostly current: made by musicians who I can still go out and hear live - their interpretations feel more immediate to me, more 'present'. And if an artist is on a particular musical journey that makes sense to me, I will follow.

If you read this blog regularly, you'll know I'm a huge fan of the soprano Carolyn Sampson. I think I properly realised how much I loved her voice when she gave her first voice/piano recital at the Wigmore Hall - and from that point, you could explore backwards through a career that already encompassed (among other things) a range of Baroque/chamber/orchestral vocal music, and then since expanding into brilliantly programmed CDs of art song with Joseph Middleton, perhaps an increase in focus on contemporary, and so on. While the range of timbres, colours and styles in her voice is extraordinarily versatile, its essential sound and character are through-lines through all these different kinds of repertoire. She might actually need her own section in the post-Sifting record den, as I wouldn't give up a note of these: 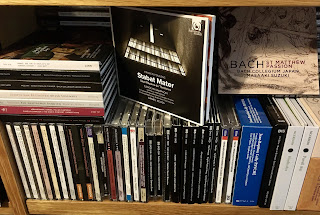 Going through the maze of discs brings to light other classical musicians that have clearly had a similar double-effect on me: not only delighting me with the sound they make but also shining their torches to show me the way to more and more great music. The pianist Stephen Hough, who mixes complete recordings of selected works with brilliant recital albums that almost work like playlists - again, uniting a really disparate discography with his sure, but sensitive touch. The incredibly soulful, moving work of cellist Steven Isserlis (a collaborator and label-mate of Hough). The choral ensemble Stile Antico, collating themed works of unnerving beauty, performed with their habitual, conductor-free, vibrancy. The harpsichord champion Mahan Esfahani, promoting his instrument with a missionary zeal, and using his albums and concerts to place it in a firmly modern context.

To me, this feels exciting: you become invested in their development, and their choices; you give your trust; you want to find out what they will all record or perform next, and how they will interpret it. And while classical musicians mostly work with material that's already there (rather than write new stuff), this process gives me the same buzz as I felt following, say, Brian Eno or Paul Simon move ceaselessly through innovative styles and techniques, or perhaps a bit later and more within my normal sphere, allowing bands like Radiohead or Dead Can Dance to place you in a new universe with each album. Obviously, there are cosmetic and circumstantial differences, but to me, this experience, this investment is the same at its root in the rock and classical worlds. Exactly the same.

You can't have too many versions of 'Winterreise'.
Clearly this is unarguable. But consider - this is the crowning art song masterpiece by my favourite composer. Add to that the fact that it's a famously enigmatic, inscrutable work, allowing everyone who records it to add to its stature - illuminating aspects of it while it still remains somehow unknowable. I haven't carried out a formal count (*embarrassed cough*) but it's possible I have enough versions to create a mad playlist with every song in the cycle performed by a different duo. Don't try this at home, kids.

What this has done is crystallise in my mind my personal favourite three versions of 'Winterreise'. (Although I'm a bloke of a certain age who typically thinks in musical lists as a matter of course, there is a reason for this: not long ago, a Twitter friend put this conundrum to me, and I haven't been able to arrive at just three contenders. Until now.) Today, my personal top trio are...
But I'm not just keeping three. I'm keeping them all. (Sorry, Mrs Specs.)

And no wonder I need Specs.
As a collector, I prize neatness, conformity, uniformity. I like things to look good on the shelves, trivial though this perhaps might be to many 'true' listeners. I love a band that (a) has a logo, then (b) keeps it throughout their whole career. I love record labels that make a visual aesthetic as much of their 'brand' as the music, whether that's Deutsche Grammophon, ECM, Blue Note or Earache.

However, I'm now wondering if this is wise. The tidy, almost scholarly approach to typefaces by some record companies can produce these squint-inducing results. This is one of those rare crossover areas between the not-often-twinned genres of classical music and black metal... who knew? 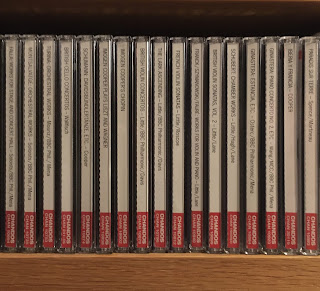 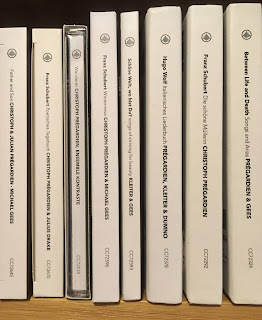 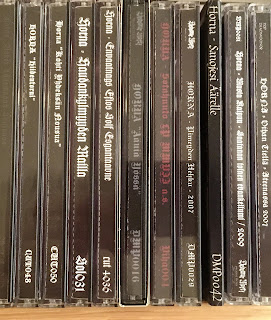 If any more insights, or assuming I don't go blind, mere sights present themselves as the Sifting continues, I will of course let you know...