Specs is under the weather... so keeping typing and eyestrain to a minimum. However, after attending a terrific gig last week that I'm bursting to talk about, I've tried a little experiment: talking to you about it, instead of writing. 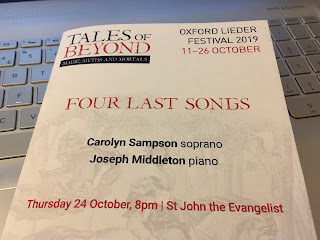 I hope you enjoy this slight departure from the norm. It's obviously completely unpolished, delivered without notes, and lacks the refinements and revisions I'd apply to a normal post (yes, it's true!). My brain, let alone my voice, is clearly operating in 'low power mode'. But I thought I'd post it anyway, partly because I ramble into a corner of my psyche. But mainly because it's sincere, genuine, and even several days later (and in a fug of cold), I clearly still get an emotional buzz when thinking about the concert. That's Sampson & Middleton for you.