Re-marriage: a return to the Royal Opera House 'Figaro'

This isn't so much a review or a write-up, so much as ... a reflection. The performance I'm thinking about while typing this belonged to the most recent run of Mozart's 'The Marriage of Figaro' at the Royal Opera House, London - which ended last month (July 2019). 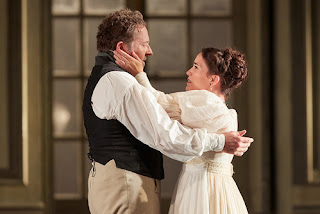 (All photos by Mark Douet, from the ROH website production gallery.)

Despite being obsessed with music for pretty much all my life, classical was the 'genre' I became fully immersed in the most recently - after rock, folk, jazz, you name it. (I don't think this is uncommon - while the classical world is right to encourage and pursue younger audiences, I believe that many 'older ears' come to it naturally in good time. Perhaps that's for another day, another post.)

As a result, I still consider myself a relatively 'young' opera-goer. There are still plenty of operas I've yet to see or hear at all, especially live. To the amusement of some of the opera experts I've befriended, I seem to have stumbled through the repertoire at times in a slightly bizarre order. One of my earliest operatic experiences (since developing a serious interest) was the entire Ring Cycle at the 2013 Proms: a baptism of fire if ever there was one, particularly when self-immolating in the furnace-like gallery of the Royal Albert Hall in summer. Sheer curiosity meant I had 'Elektra' and 'Wozzeck' under my belt before going anywhere near a 'Tosca' or 'Traviata'. I've two 'Akhnaten's to one 'Aida'. So it goes.

But it has now been long enough for me to see certain operas more than once, and have my appreciation of the work enriched by witnessing more than one interpretation. For example, I was very fortunate to see one of my favourite operas, Britten's 'Billy Budd', in two productions, fairly close together. For me, Orpha Phelan's version at Opera North gave us shattering contrasts, Roderick Williams's sunniness giving us a naive, endearing Billy, like a lamb to the slaughter before Alistair Miles's devastating, wracked Claggart. It was a masterclass in turmoil, entrapment.

While the Deborah Warner production, also at the Royal Opera House recently, went a little more below the ocean surface. I found slightly more sinuous threads running through the piece: from emotional continuity to mystical ambiguity. It would be easy to say that deploying a often-shirtless Jacques Imbrailo as Billy would ramp up the homoeroticism, but this also gives the character a bit more gusto, confidence, agency in male company, especially as he morphs into a near-Christ-like figure towards the end, blessing Vere ahead of his 'crucifixion' (we see him adopt the posture of the cross, but the actual hanging is off-stage - instead, he 'ascends' a ladder to an unseen scaffold).

Equally, Toby Spence's Vere received his officers while still at peak relaxation, wrapped in his bathrobe; Brindley Sherratt's remarkable Claggart was a more louche, calculating figure - how each man addresses these underlying (or less underlying) impulses drives the inevitability of the outcome.

It's not a matter of preference - although in all honesty, you can probably tell that the Warner version is more fresh in my mind. It's more that seeing such two different approaches serve to underline the richness of the opera itself: it's the same music, same libretto, but so much to investigate and unpack.

But my return trip to 'The Marriage of Figaro' - having seen it before at the ROH - marked one of the very few instances I've seen the same production of the same opera more than once. (I realise the longer I go to the opera, the more often this will happen, but at the moment it's still quite a novelty.) But if anything, the differences between the two experiences seemed even more profound, to the extent that I started to think about the opera in a completely new way.

Because I have a definite preference for the more recent performance, I'm not going to mention anyone involved in the earlier run by name. (If you were desperately keen to find this stuff, you'd be able to. But there's no point, nor need. That initial visit, in David McVicar's gorgeous period staging, is a really cherished memory: it had a superb cast in great form, and I came away completely on board with why this is one of the best-loved - and probably best - operas ever written.)

Fast forward to last month, then, and I was back to see 'the same thing' again - but, of course, with a new cast, who seemed particularly intriguing. Figaro - groom, schemer, joker in the pack - was Christian Gerhaher, a baritone I'm more used to admiring for a modest, subtle recital persona and caress-like voice. The Count was sung by Simon Keenlyside, whom I'd previously only heard on the opera stage in roles of visceral, compromised pathos: Rigoletto, Wozzeck.

The ROH had also drawn attention to perhaps a more arresting casting decision. Cherubino, the page in the throes of adolescent randiness, is most often portrayed by a mezzo-soprano - leading to some delicious 'meta' comedy in a scene where the character has to disguise himself as a woman, in the process becoming more like the singer playing him. However, this time round, countertenor Kangmin Justin Kim was taking on the role.

I have to say, for me this all resulted in an operatic 'scales falling from eyes' moment - as if my appreciation for 'Figaro' suddenly had a blu-ray level clarity after several years watching a battered old VHS tape. While it's perhaps obvious, for example, that power is a crucial theme - the Count's compulsive philandering is only possible because of his exalted position - I had previously felt that the 'meat' in the opera was rooted more or less solely in poignancy: Susanna's seemingly inescapable predicament and the Countess's anguish balancing the more farcical game of wits the men must play out. And of course, that's all still there.

But this performance had the upper and lower hands between characters rise and fall like a graphic equaliser, shifting undercurrents like Warner's 'Budd' - but here, constantly disturbing the balance of power. And remember, nothing about the staging had changed, so this was all in the acting, singing
and direction.

Gerhaher's Figaro was of course quick-witted and humorous, but he had none of the 'Mission: Impossible' confidence of his inability to fail, nor the bravado of the court jester. Gerhaher filled in the other, more feasible side of his personality: his desperation to protect, and hold onto, his younger bride-to-be, the sense that he really was living on his wits.

And why this desperation? Because of Keenlyside's interpretation of the Count, which must be one of the finest performances I've seen on an operatic stage. The Count could be buffoon-like (making his deplorable actions bearable to watch), charming, a spoilt brat in the grip of a mid-life crisis. Keenlyside can do all of that - but again, in a performance that a Twitter friend of mine described as worthy of an Oscar - he filled in the gaps, unafraid to put a genuinely dark spin on the Count and imbue him with a sense of real menace. Keenlyside's speciality of barely-contained, coiled energy made this Count a real threat: he could get violent; he could just take what he wants. The only actual restraint on him is that this is nominally a comedy. 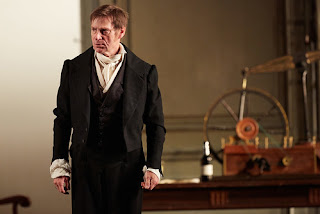 Keenlyside's vocal abilities are immense: but his supreme skill at singing the way he does while nailing such a varied and complex arsenal of physical gestures and movements ... at times I wonder if his particularly combustible combination of these talents is unique. His hyperactive characterisation - where he can be crooning sweet nothings in one direction while frantically gesturing annoyance in another, like a man possessed - made him almost impossible to tear your eyes away from.

But for all the apparent diffidence, Gerhaher's maturity and quiet resolve make Figaro and the Count feel evenly matched. There was one moment that I think will stay with me for ever. In Act 3, the Count is still worrying away at Figaro about who really jumped from the Countess's window and, for maximum confusion, Figaro suggests that both he and Cherubino could have done so - a clearly, befuddling and nonsensical idea. But such was Keenlyside's terrier-like persistence and Gerhaher's wearied frustration, that the exchange built up real tension, culminating in Figaro snapping at the Count outright (broadly, "If I jumped, he might have done as well" / "He, as well?" / "WHY NOT?!"). Gerhaher suddenly increased his volume - and his mass, leaning over the Count. Keenlyside, naturalistic to the core, stopped dead still then visibly flinched, before continuing. In that few seconds, the duo hinted at a long-standing relationship where, although not in title, Figaro has at times held sway over the Count, as much as the other way round.

Add to this the fact that we had an 'actual' male Cherubino. Kim gave a really winning performance: being the correct sex is arguably a significant head start, but you lose the gender-play aspect I mentioned earlier. So why do it? It seems to me that successfully channelling this character is more about convincing as a lovestruck teenager, as Cherubino wrestles with his adolescent pangs of desire. But once you do cast a chap, Cherubino seems like less of a lovable, forgivable irritant and more like a nuisance, even a threat. The decision undercuts our willingness to believe he could pass for a woman (generating a slightly different take on the comedy) and makes him more physically imposing. It all chimes in with this interpretation's willingness to bring out the male characters' dark sides, to place before the audience the actual consequences of men's propensity to behave in this way. 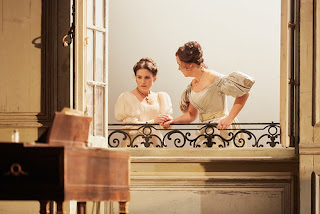 Because - for all that I've focused on the men - the key female roles also received interpretations to match. Julia Kleiter's Countess still commanded sympathy from us as she laments the state of her marriage, but she was equally commanding in other ways, deftly managing Cherubino and, ultimately, subduing a finally-defeated Count at the opera's close. And Joélle Harvey's spirited Susanna, fizzing with vibrancy and determination, was the foil Gerhaher's Figaro needs, restoring some joy to a character whose sparkle, we sense, has been dimmed over the few years since 'The Barber of Seville'.

(I should probably also mention that with John Eliot Gardiner conducting, the orchestra had both a suppleness and 'attack' that fully supported this - to my mind - more complex and thorny reading.)

I'm sure some opera experts among you who find your way to this post will think or say (no doubt genially), "Catch up, slowcoach! Of course 'Figaro' is a multi-layered opera - all of this is self-evident!" I can take that one on the chin - I haven't been in the thick of this stuff for as long as you.

But it led me to some really useful and rewarding realisations and conclusions. On the artistic side, for example, it made 'Figaro' even more of a companion, to me at any rate, to the other Da Ponte operas. I could get an instant feel, I think, for the fathomless maturity and intricacy of 'Don Giovanni' and 'Così fan tutte', their refusal to let you relax into either a comic or tragic frame of reference. 'Figaro' has taken a second run to reveal something similar to me.

Whereas on the practical side, while I've always assumed I understood what a 'revival director' does, only being able to compare/contrast in this way has brought it home as a tangibly exciting and revelatory role - and I have Thomas Guthrie to thank in this instance for all the new and challenging insights I felt this version of 'Figaro' gave me.

Still fresh out of the starting blocks for me, then; still turning important corners.