I'm sure that any of you with a fondness for cinema and a manageable journey to or across London will have read about, if not already been, to the incredible Stanley Kubrick exhibition at the Design Museum. 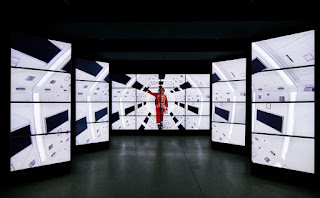 If you're in any way undecided: please go. It has the authentic, comprehensive feel you would expect from such a vast and detailed archive, but never feels dry or heavy. While the great man's films often moved at a stately pace - and were none the worse for that - this show gets the balance right between informative detail, exemplary clips from the movies themselves, and original relics or tools of the trade for fans like me to nerd out over. Certain parts of the exhibition even manage to simulate the detached eerieness of many Kubrick films (sometimes it's hard to remember that 'The Shining' is his only out-and-out horror film), but punctuated by frequent simple thrills at spotting THAT costume, or THAT prop.

Here's a brief tour of some of the exhibits that particularly struck or affected me. (There is so much more to see.)

The very first thing you do on showing your ticket is walk along the Overlook's famous patterned carpet into a corridor of screens (shown above in a publicity photo by Ed Reeve, from the Design Museum website - the only shot in this post not snapped by me). A quick succession of scenes on the far wall show with brilliant economy Kubrick's regular motif of the symmetrical 'into the distance' perspective shot. Then only a few paces later, an early look at Kubrick's chessboard instantly throws some light on his signature style... 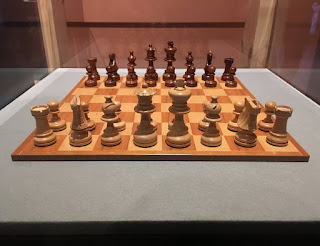 This being the Design Museum, I was hoping they'd give some quality posters from the archive pride of place - and sure enough: 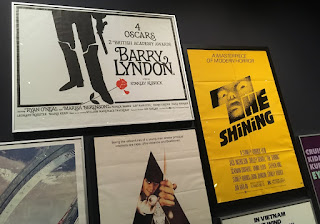 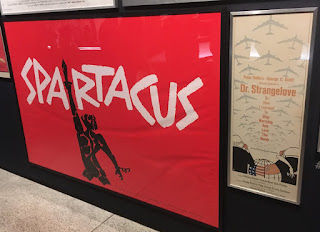 (And given the stylised graphics of so many Kubrick film posters, I wonder why this suitably sinister treatment for 'Eyes Wide Shut' was rejected in favour of just a photographic still of Cruise and Kidman. I suppose I've just answered my own question, but still a pity. But I'm not going to argue with the cult...) 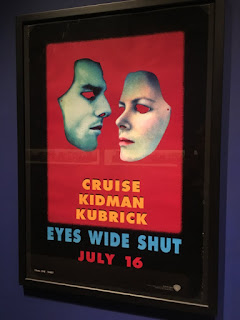 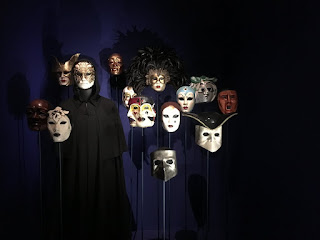 The exhibition doesn't dwell on Kubrick's work before the 'imperial masterpiece' period, but it would be hard to find a film by anyone with a more, well, 'arresting' strapline than 'Killer's Kiss': 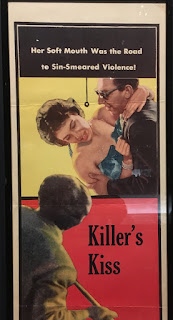 Appropriately for such a 'show, don't tell' director, I really enjoyed the way the exhibition isn't overloaded with commentary, as such, but lets a great deal of behind-the-scenes and documentary photography do the talking. For example, even off set, the photos of Sue Lyon (who played Lolita) surrounded by older men have a slightly uncomfortable charge to them... 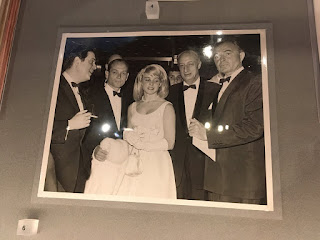 Filming 'Spartacus' was clearly terrifying (although Kirk Douglas seems to have been fond of the experience, judging by this letter to SK...) 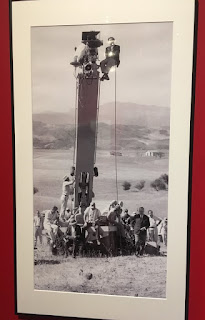 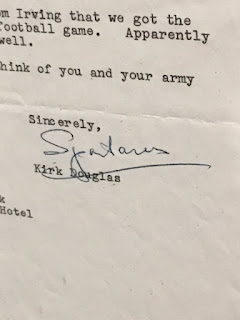 And nailing the exact visual aesthetic for 'A Clockwork Orange' ranged from finding the right brutalist locations that would look both futuristic and timeless (here Thamesmead) to enacting a number of 'hat tests' before deciding on Malcolm McDowell's bowler... 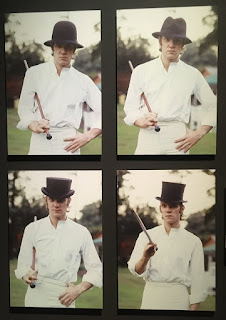 The sheer beauty of 'Barry Lyndon' on-screen is nicely prefaced by breathtaking storyboards and a series of gorgeous test photographs of Marisa Berenson (anticipating the use of natural light the film is renowned for). 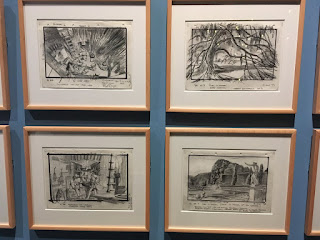 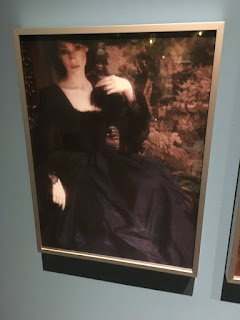 Although this is definitely a museum (as opposed to a gallery) show, the 'hang' is very lucid and resonant, careful to show where Kubrick found inspiration or benefited from gifted collaborators. The 'Full Metal Jacket'  section is a case in point: the 'Born to Kill' helmet on show by the famous Don McCullin image of the shell-shocked soldier; the astonishing transformation of the deserted Beckton gas works into the Vietnamese city Huế (the film's production designer was Anton Furst). 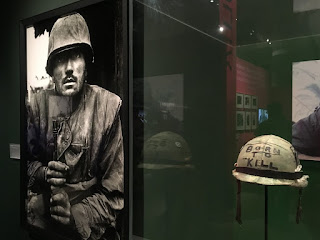 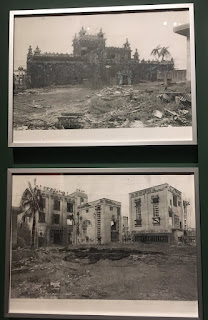 ...not to mention Saul Bass's immediately distinctive storyboards for 'Spartacus' (best known for his unmistakable opening title sequences, Bass also designed the posters for 'Spartacus' and 'The Shining') and Ken Adam's set designs for 'Dr Strangelove': 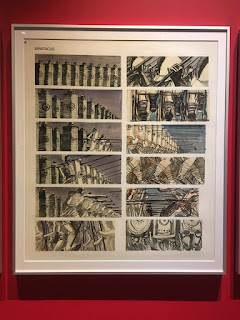 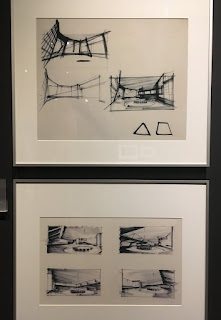 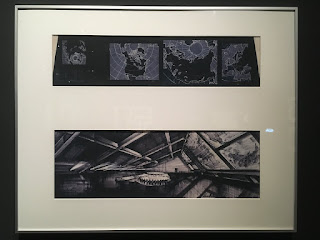 One moment in the exhibition sent a genuine shiver down my spine: with no fanfare, and in as unassuming a way as his detached monotone might suggest, you suddenly meet HAL. (This is one 'red eye' I actually wished would show up more in the photo...) 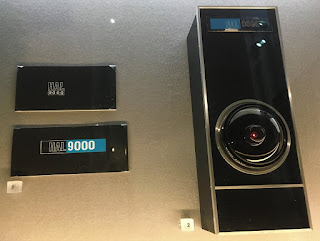 I noted that the curators had left HAL safely disassembled. Just in case.

The slightly-reverent quiet of a museum environment suited the '2001' exhibits. Sadly, we weren't allowed to take up one of the space station's red chairs, but the emptiness contributed to that arid, airless feel. I was taken aback to see that the '2001' script resembled a large black rectangle... 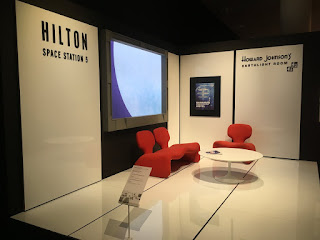 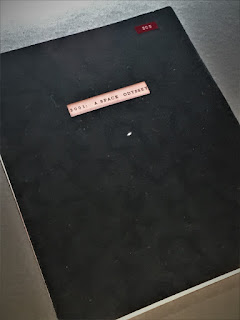 Inevitably, I was most excited to see what was on display from my favourite Kubrick film, 'The Shining'. It's one of the only films I've written about at length on this blog, here. (I love it, but my relationship with it is, well, tortuous.) Certainly when it came to props, the exhibition didn't let me down - the actual typewriter ("aargh!"), the actual Grady twin costumes ("AARGH!")... 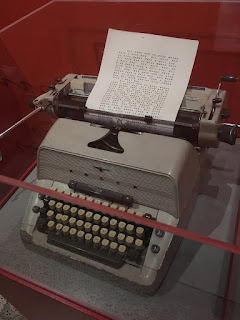 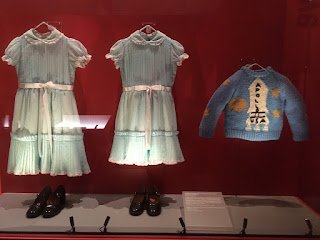 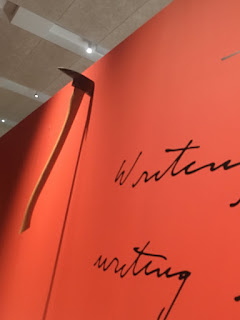 But there is something about the level of meticulous preparation, taken to such extremes for this film, that makes you feel there is something insane and uncanny embedded in the celluloid. The paper modelling for parts of the Overlook gave me the chills: it's so horribly precise: 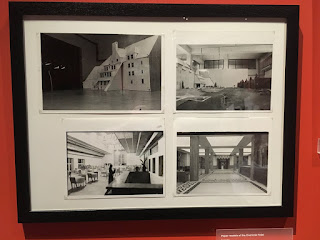 I felt admiration (and - *whispers* - a little amusement) on seeing photographs of Garrett Brown, the genius who invented the Steadicam - so crucial to the unnatural glide of the all-seeing camera monitoring the Torrance family. Kubrick was an early adopter of the new technique and Brown operated the camera on 'The Shining' himself. I loved the fact that he's strapped into it in every picture, as if Kubrick never let him remove it (wouldn't have put that past him, after all), or as if he'd in some way merged with it... 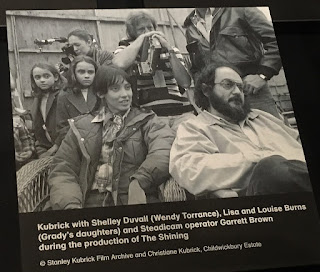 Spoiler alert: If you've ever wondered how that haunting final shot of the 1921 photograph might have been executed without the aid of such state-of-the-art technology, I can help.


The exhibition is at the Design Museum until 15 September 2019 - get there if you can.