There's something particularly exciting about seeing a new opera - by which I mean brand new (not just new to me). The opportunity to go in completely 'cold' - very appropriate in this case - and treat the work much like a first encounter with a book or film, with no idea of what to expect or how things will turn out... it's surprisingly rare. Perhaps one of the most satisfying aspects of Scottish Opera's production of 'Anthropocene' - the latest collaboration from Stuart MacRae (music) and Louise Welsh (words) - was that the opera itself carried those feelings of exhilaration and suspense right through into the action. I left Hackney Empire as wrung out with the tension as I would have been by any Christie play or Hitchcock film. 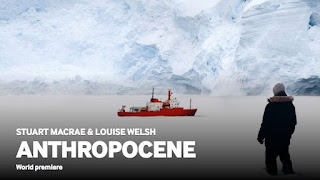 Much like one of those dramas, our characters are contained in a confined space: the ship 'Anthropocene', owned by Harry King, an egotistical businessman who has financed the Arctic research expedition for which the vessel was built. King himself is on board, along with his daughter Daisy; Miles, a journalist King has hired to write up the voyage; crewmen Ross and Vasco; and last but not least, the leader of the expedition, Professor Prentice with her husband Charles, also a scientist.

(Pause for thought: Although the run is now over - and the programme includes a synopsis and complete libretto - I will try and avoid including too many spoilers. I think there's every chance the piece will be revived or recorded, and hopefully enter 'the repertoire', and the more people who get to experience it without full knowledge of the evening's surprises, the better.)

As the opera begins, Charles, Daisy and Miles are away from the ship, exploring the ice. Back on deck, as the water freezes around the Anthropocene, Prentice has the agonising decision of whether to leave while the ship can still move, or wait for the party to return. She makes up her mind to go, but too late: they remain trapped. Meanwhile, the trio come back with an unexpected discovery - a block of ice with a body suspended inside.

On seeing the creature's eyes move, Vasco breaks the block apart to reveal a young woman, who we come to know only as 'Ice'. Various divided loyalties and hidden motivations among the crew cause the group to fracture - especially as, for horrifying reasons, rescue seems increasingly impossible. In the meantime, Ice gradually recovers her faculties, and ultimately her memory of her origins and identity. These two plot strands - one rooted in a grimly human psychological horror, the other in a more timeless, mystical register - beautifully converge at the end of the opera, as the characters are faced with a dilemma that renders their scientific reasoning and emotional instincts inseparable.

I loved pretty much everything about this. In particular, the production makes brilliant use of the way time moves in opera - how we take it as read that what we do see is likely to happen very slowly (everyone has to sing everything for a start), and that certain leaps might be made elsewhere for storytelling economy. 'Anthropocene' absolutely thrives on this stuff. Just as the characters wait for rescue, we the audience suffer our own, relentless, ruthless delays: the almost unbearable opening scene when we're already unsure if all the characters will start the opera alive; the nervous circling of the still-intact block; Miles's drawn-out, desperate attempts to speak to his editor over the phone; the patient coaxing of Ice's first words... and this is all just Act I.

Yet for all that, the opera feels pacy - it bends time both ways. On several occasions, we need to keep our eyes on all corners of the stage: what is character X up to while we listen to Y speaking to Z? Even the interval is pressed into service (and apologies for the slight spoiler here): as the curtain opens on the severe winter of Act II, the characters are visibly more frozen, their suddenly snow-white faces like death-masks. Their haunted, monochrome expressions - so matter-of-factly present - are a visual coup worthy of any horror film, plunging you back into the situation in an instant, washing any interval warmth away. Among them, Ice walks, unaffected, in a t-shirt. 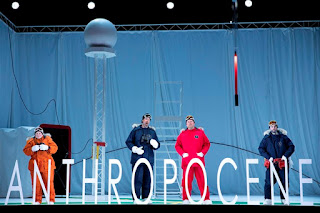 The staging and overall look of the thing - stylised yet not completely surreal - are crucial to the atmosphere. Again, there are filmic gestures: the name 'ANTHROPOCENE' is prominently displayed at the front of the stage, looking like an elegant title-card, but in fact forming the name on the ship itself. The sides of the deck compress our view almost into a 4:3 'Academy ratio' screen shape reminiscent of old monster movies.

I enjoyed the way that the characters' suits were colour-coded - possibly a function of King's ego to establish a hierarchy? He clothes himself and daughter Daisy in red; Prentice and Charles in orange; Ross and Vasco in navy (I think!) and loner Miles - with no on-board ally - in light blue. As the action progresses and loyalties blur and dissolve, these codes are abandoned until everyone - literally in the same boat - is in white.

I had the luxury of a great seat, close to the stage (not usually an option for me somewhere like the Royal Opera House!) - and I felt privileged to see such accomplished acting and singing from the cast. As I've hinted at before, facial expression is vital for the piece to operate at full power, and in a story like this - where almost every character is at the limit of their physical endurance for a sustained period of time - we're talking about real dramatic commitment. I can't remember seeing a group of performers quite as intensely 'on' as this - able to deliver the sung conversations with real conviction while shivering, crumpling, on the point of collapse. Benedict Nelson's Miles was an absolute masterclass here: constantly watchful, terrified, scheming while near-deranged with panic: a bold, selfless, charismatic turn.

Other standouts included Jeni Bern's Prentice: through her character, we seem to investigate the irony that this woman of science is buffeted by heightened emotion, trauma and superstition - in other words, a more traditional/sexist view of the 'feminine', especially in opera - but at no point does she weaken or waver from her convictions. Even her final decision - which will send friends out arguing into the night - is reasoned and thought through, for right or wrong. Bern sang the role with finely-wrought steel, giving the scientist a genuine tenderness in a beautifully-judged scene with Charles, but with the necessary grit and wilfulness of one in charge. 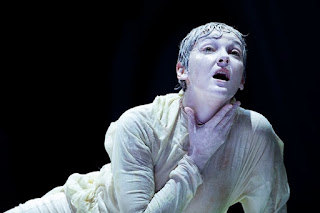 Jennifer France made a captivating Ice - her crystalline soprano voice perfect for the brittle nature of the character: the superb scene where she essentially learns to speak again, so can only get the words out in staccato bursts at the top of her range... it really felt like the fall of a tiny shard, or intermittent drop. It looked to this lay listener like a massive technical challenge - worth it, for such a spine-chillingly effective result.

But then, what a piece the cast had to work with. Stuart MacRae's score - in the hands of the Orchestra of Scottish Opera, conducted by their Music Director Stuart Stratford - felt so flexible and versatile. Lyrical when a short-lived sense of relief was needed (Daisy and Vasco's flirtation, mirrored with the older, more lived-in love of Prentice and Charles, that I mentioned above)… but elsewhere, the orchestra were made to stretch and groan with each lurch of the ship and crack of the ice - at one point the Arctic wind whistled so convincingly I thought the pit might freeze over. The contrast he created between phenomenal climactic crescendos and unnerving near-silences moved me nearer and nearer the edge of my seat.

Louise Welsh's libretto is a handsome achievement in its own right: the economy of expression allows the dialogue to 'snap', even at opera speed. Ice speaks with a folk-poetic turn of phrase ("Only blood can melt the waters") that marks her out as something other. King's Boy's-Own nautical obsessions bleed into his language as he imagines his businesses "crashing against the rocks". The scene between Prentice and Charles that I keep mentioning - because it still haunts me - merges the worldly and otherworldly as Prentice tries to shake off her nightmares, when she momentarily accesses Ice's poetry ("Sleep unlocks labyrinths … Death wound itself around me") but speaks to Charles with an open-hearted clarity: "I love you but I had to make a choice".

Seeing 'Anthropocene' with next to no advance knowledge was an unforgettable experience - but even though I now know all its secrets, I just wish I could see it again. Let's hope for a recording or return to the stage - we don't want this one to melt away.