[Spoiler alert - I talk in some detail below about the plots/endings of the films 'The Shining', 'The Wicker Man', 'Carrie' and 'Psycho'. If you've not seen them but, like me, are fond of the uncanny, then by all means stop reading this now - with my blessing - and seek them out. Then please come back here afterwards!]

I rarely, if ever, write about cinema - music or art always takes over! - but I've been inspired to here after listening to a terrific podcast, 'Kermode on Film'. Mark Kermode will need no introduction to many of you, but to readers perhaps further afield, suffice to say he is at the very heart of film appreciation and criticism in the UK. A national treasure, to my mind. He succeeded the great Philip French (who I have written about, here) to head up the superb team of film writers at The Observer, and he co-hosts the BBC's irreplaceable Radio 5 Live Film Review show (commonly known as 'Wittertainment') with Simon Mayo. A really engaging writer on both film and music, he puts his words into action: championing emerging film makers, creating live events to interact with fans and fellow film buffs, and importantly, encouraging others to write, discuss and celebrate cinema in all its forms.

The particular episode of 'Kermode on Film' that got my mind whirling was MK's recent conversation with film-maker Jack Howard about 'The Shining'. It's brilliant stuff - I'd encourage you to listen and I'll try not to repeat too much here. I think it's fair to say that they are both ambivalent about how successful 'The Shining' actually is as a horror movie - but it's such an enigmatic piece of work that just by sharing their very different responses, they still open each other up to new ideas after who knows how many viewings. 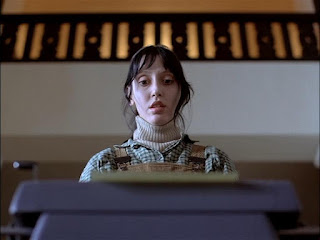 'The Shining' is possibly the only film I have a genuine love/hate relationship with. There are movies I adore, and others I don't - but I can't think right now of another one that both fascinates and frustrates me simultaneously in quite the way this film does. I own a copy, and always enjoy watching it - but it annoys as well as absorbs me. For the first time in ages, the podcast started me thinking about why this was, and - almost as if I was joining in the chat myself - I found myself seeing certain aspects of the movie in a new way.

A lot of people - including, famously, Stephen King - dislike the liberties Stanley Kubrick takes with the source material. I'm actually not too 'purist' in this sense and rarely identify with 'the book is always better than the film' takes. I remember being at a reading years ago given by the novelist Kazuo Ishiguro, and during the Q&As, a rather pompous-sounding attendee asked how he coped with the fact that the film of 'The Remains of the Day' lost so much of the novel's approach. The author politely replied that the two enterprises were separate - he thought it was a great film and that it wisely avoided attempting to replicate the book, which would be impossible. This made a huge impression on me: it's possible to honour and respect the source, without trying to copy it.

A good comparison here - staying in the King universe - is Brian De Palma's film of 'Carrie'. It's faithful to King's plot, but De Palma re-fashions some of the novel's 'unfilmable' moments with great visual set pieces that a book could not conjure. The split-screen carnage is perhaps the obvious example. But there's also the killing of Carrie's mother - in the novel, Carrie uses her telekinesis to slow Margaret's heart to a stop, a brilliantly chilling passage; but who would question the bravura decision in the film to crucify Margaret with the kitchen knives, not only delivering an unforgettably visceral image but also symbolising her macabre, distorted mix of the domestic and devout? Then, the final question-mark ending of the book (a mum's letter describing her toddler displaying similar powers to Carrie's) becomes one of film's greatest jump-scares, giving a different but completely cinematic spin on Carrie's lingering presence. 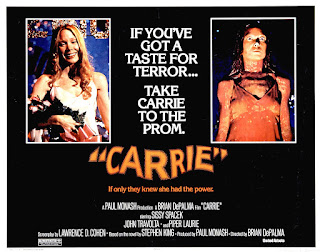 I think there is some of this in Kubrick's 'The Shining'. For example, the risk of mobile topiary animals looking daft is so great (er, see the TV remake for 'examples'), would anyone question the genius of creating the maze - an outdoor 'mirror' of the hotel's impossible corridors?

But I believe that most of the other changes Kubrick makes are rooted in something a bit more slippery and knotty than visual flair (not that the film is short of that). Two of these changes, in my opinion, fatally weaken the movie and are the parts that irritate me on each viewing. First, the axe. In the novel, Jack's weapon is a croquet mallet - crucially, it's much harder to kill anyone with it, and it's a key factor in Jack's ultimate inability to murder his family, causing him to 'fail' the hotel. In turn, this leads to my second gripe: the death of Halloran (who rescues the family and survives in the novel). In the film, this simply feels like clumsy plotting: dragging Halloran all the way to the hotel, only to have him bumped off within seconds of arriving - because Jack is using an axe - is a phenomenal let-down. In a film that tends to dodge neat interpretation, to have such a contrived moment - 'well, it's a horror film, so there has to be a murder, if only to get him away from that bathroom' - feels like a massive 'shrug' moment even as you're watching. As MK points out, you don't even notice it's supposed be a jump scare, such is the sense of anti-climax.

So why make these changes - along with all the others that don't bug me (including Nicholson's treatment of the character, which - however divisive it might be - I believe is sound)? I think it's because the film is on the hotel's side. And that's why 'The Shining' is scary.

A brief digression to talk about possibly my favourite horror film, 'The Wicker Man'. While the film is widely acclaimed and its shocking denouement justly revered - I equally come across people who don't know what the fuss is about, primarily because it doesn't frighten them. As a result, they see the end almost as blackly comic, a Roald Dahl-style twist, after the fruity antics that have preceded it. (Much like viewing 'Psycho' after the Norman Bates character has passed into film lore, it's also quite difficult to watch 'The Wicker Man' without any knowledge of how it pans out - partly because there's a gigantic wicker man on almost all the posters and DVD covers. WHY??!) 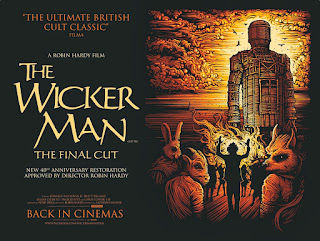 But to me, the dark power of the film, the creeping dread that almost grows in your subconscious (without ever making you actually jump out of your seat or recoil in terror)… is that the film behaves as if it's on the islanders' side. Everything they do is completely normal. They go about their various idiosyncratic routines as if they're the most natural things in the world (which, since they worship nature, they are), and the film supports them every step of the way with its depiction of their uncomplicated contentment and spook-folk soundtrack. Only Howie blunders into each scene, outrage building, like a comic irritant - never learning to read the room, incredulous at the heathen hi-jinks. But I'd be wanting to spend my weekend with Christopher Lee, Britt Ekland and Ingrid Pitt. By the end, Howie is almost like one of those Agatha Christie victims who thoroughly deserve all they get, and it's testament to Edward Woodward's fine performance that real fear, blended with stoic resignation, turns Howie round in the viewer's eyes in the final minutes - and you realise the extent of the horror you have essentially been going along with. But the film doesn't bottle it. Howie is sacrificed, and the crops will not fail.

When iconic cinematic locations are created, people often see them as 'characters' in the films. This is especially true of haunted house movies, and I think it's fairly common to regard the Overlook in this way. However, while most of us would think of it as the villain... I'm not sure that Kubrick does.

If anything, it's the film the hotel might have made. The opening shots are rightly celebrated as conveying the feeling that an ominous, omniscient viewer is focused on Jack's car on the way to the interview - right from the outset. The pioneering Steadicam takes that glide around the corridors are not strictly Danny's point of view - they stalk Danny, following him, eyes unencumbered by a human form, or gait. The architect-like symmetry and precision of so many frames, almost like stills. For all the suggestion that the movie dwells mostly in the psychological, tortured headspace and hallucinations of its characters (while the book wholeheartedly embraces the supernatural)… there are unambiguously paranormal events where the hotel intervenes - releasing Jack from the locked larder or telling him through the Grady character that Danny has contacted Halloran telepathically - and arguably several more, such as the ball rolling towards Danny to draw him to room 237 (after this visit he sustains a real bruise, driving a wedge between Jack and a suspicious Wendy), or the film's only gratuitous bit of 'because we can' visual effects, where Jack gazes down into the model maze and sees Wendy and Danny in the real one, as if the hotel is allowing him to monitor their movements.

Seeing the film as the hotel's version of events makes sense of some puzzling decisions. For example, to return to Nicholson's performance, which many feel is at the lunacy ceiling from the outset - none of the book's sense of the fundamentally good man being driven gradually insane. But, for Kubrick's Overlook - if Jack has always been at the hotel, then the hotel has always been with Jack. Even discounting the disorientating photo shown at the end - Jack at the hotel in 1921 - we don't see a version of Jack before the interview, when the hotel already has this 'incarnation' of the caretaker in its clutches. 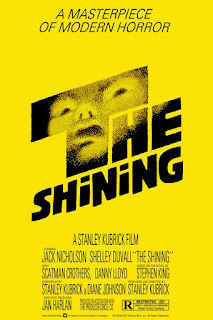 Also, Kubrick's Overlook survives (in the book, it does not). Wendy and Danny might get away, but the evil entity - like a Summerisle resident - carries on beyond the life of the movie, dispensing with its 'victim'. As such, 'The Shining' on screen peters out to some extent, denied the novel's explosive climax in favour of a lingering sense of unease, underscored by the queasy-listening soundtrack and mind-bending photograph.

I think this lack of resolution, along with the unshakeable feeling that our view of events is through an alien, corrupted lens, is what keeps me going back to the film and overlooking (ahem) my own personal quibbles. Equally, the film doesn't have the potentially ironic reversal that 'The Wicker Man' offers us. As with many auteurs, Kubrick's films are to some extent about Kubrick - that cool, aloof intelligence - big themes through the eyes of a detached observer. Did Kubrick identify with the Overlook to some extent? I imagine it's possible - the control-freakishness and perfectionism that manifested itself not just in the way the films looks and moves... but also in his notorious treatment of Shelley Duvall and Scatman Crothers to get the performances he wanted. There does seem to be traces of manipulative malevolence in the celluloid: perhaps this is why it draws me in and repels me - keeps me watching, but at a distance.