Holding all the cards: 'Mary's Hand' at Holy Cross Church

With a single act, just one role, and a score requiring only three musicians, new chamber opera 'Mary's Hand' is outwardly modest and compact. However, in terms of its scope, ambition, and ultimately, its emotional impact - it's anything but.

The sole character in the opera is Mary I of England, or Mary Tudor - resurrected to talk us through her life - to set the record straight. After all, she has been on the wrong side of history for several centuries. A devout Catholic, she spent her reign trying - and ultimately failing - to undo the Reformation. That she burned 283 Protestants at the stake in the process (along with, no doubt, her involvement in the demise of Lady Jane Grey), earned her the infamous nickname 'Bloody Mary'. Staring out at us from formidable portraits by Hans Eworth or Antonius Mor, she seems destined to remain the shadowy flipside to her bright, shining half-sister, Elizabeth I - 'Gloriana'.

'Mary's Hand' doesn't seek to excuse, or exclude, these actions. Mary's opening line is "I am the one you do not like", and she confronts the executions straightaway. Deeply religious she may have been - and throughout history, religion has often been a violent matter - but her willingness to put so many 'heretics' to death seems to have caused considerable revulsion even at the time. What other peculiar, contradictory aspects were there to her character? And by examining these, can Mary be 'explained'?

Brilliantly, Di Sherlock's libretto - without insisting on a final, all-encompassing answer - focuses on restoring Mary to three dimensions. To bring the Queen from the dark into the light, Sherlock seizes on two key traits from a part of Mary's personality less prominent in the history books: her fun side. 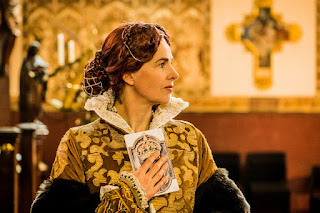 (Clare McCaldin as Mary I, photograph by Robert Workman)

First, Mary's love of card games, which provides the opera's storytelling motor. Mary's 'hand' is in fact a set of playing cards - "Royals only!" - with each one representing a figure in her life - and a few 'trick' cards in there for good measure. The court metaphor is superbly worked through - hearts are those she loves; diamonds guard their wealth and position; clubs are the intellects; and spades are the threats ("those / who speak to me of Death"). One of Mary's most chilling lines is delivered as Anne Boleyn, the Queen of Spades, secures the affections of Henry: "She so perverts him / Red turns to Black" - and the King switches suits from Hearts to Spades. (I wonder if this malevolent 'sleight of hand' is also a nod to opera's first 'Queen of Spades', Tchaikovsky and Pushkin's supernatural avenger?) Enemies are challenged to put their "cards on the table", and addressed as "Knave!"

Another masterstroke is that the opera itself is ruled by the cards. While there is a fixed opening and epilogue, and certain sections belong together, at several places Mary invites an audience member to choose a card. Their selection dictates who Mary tells about next. This means the precise order of events can be 'shuffled' with every performance. As stagecraft, it succeeds on a number of levels - we are drawn even more closely into Mary's imagined 'world' through interaction; the need for subtle ad-libbing from the performer (as well as the readiness to jump into the opera at several different stages) brings a heightened sense of spontaneous electricity to proceedings; and it beautifully reflects the fragmentary state of Mary's psychology, the jigsaw puzzle we were all engaged in completing.

Second, Mary was keen on fashion. She starts the opera wearing a spectacular reconstruction of the dress she wears in her coronation portrait. As more of her thoughts and feelings are exposed, so she sheds the outer layers of her outfit. As this is a new opera with, I hope, many more performances to come in future, I am actually aware of 'spoilers' - and even though many facts of Mary's life are on record, the interpretation and insights of the opera's final scenes are deliberately delayed and worth experiencing unforeseen ("You shall hear how nature did play false / when last I play this card"). So, without going into too much detail - more than just a simple show of 'undressing', the costume in which we last see Mary has its own powerful symbolism (sacred? medical?), as much as the surface robes we see her reassemble, empty of their wearer.

Martin Bussey's elegant, expressive score makes maximum use of seemingly minimal resources. Written specially for the mezzo-soprano performing the role, Clare McCaldin, Mary's part deftly moves between spoken word and sung passages. In a performance that's somehow both handsomely relaxed and precision-sharp, McCaldin at first negotiates almost patter-like passages that draw us in with speech while seasoning the text with sung notes.

The effect is a 'best of both worlds' hybrid - the musicality and cathartic power of opera, combined with the intimacy and immediacy of a monologue. McCaldin has stage presence in, er, spades: from her almost seductive coaxing of audience members to choose their cards, to her absolute command of Mary's moodswings with lightning changes of expression (gossiping to the Queen of Diamonds card representing her best friend Susan; collapsing into tears at the key line "The Queen does not weep").

Sometimes, she speaks to confide in us, before switching instantly to a public, sung, forceful 'exterior' Mary. And from the mezzo space, there's power to be had from going high as well as loud: there's an especially astonishing passage - dealing with the burning of the bishops, Cranmer included - where McCaldin sings several terrifying, vehement runs, from a low speaking tone to a piercing cry at extraordinary speed, like flames coursing up the wood.

Alongside such a powerful vocal performance, the musicians still manage to make their mark. At times, it felt like Gabriella Swallow's cello followed Mary, eccentric, at times hyperactive, at others mournful, with bursts of percussive noise and staccato reaction. Meanwhile, Heidi Bennett (trumpet) and Clare Hoskins (oboe and cor anglais) possessed a kind of heraldic grace - at some of the opera's most poignant moments, Bussey skilfully combines these forces, as if Mary has to give in, smothered by the court machine. At other times, he has the players hold back totally, giving McCaldin the space to sing out into the church unaccompanied.


Even the setting was perfect. Holy Cross Church in St Pancras almost became a character in its own right, with visually apt spots for Mary to sit, kneel, pray … and even the pulpit (delivering one glorious section, "The birds of summer are flown...", as a haunting, haunted aria). While it would be lovely to think this opera might be recorded one day, as written and performed it's a truly multi-sensory experience, making best use of its close-quarters visual richness in tandem with the taut, evocative soundworld. Well played, indeed.

'Mary's Hand' was staged by McCaldin Arts at Holy Cross Church as part of 'Tête à Tête the Opera' Festival.

You can find out more about the opera on the McCaldin Arts website, and read the libretto in full here.

There is currently one more confirmed performance taking place next spring, at Pinner Parish Church, 7.30pm on Saturday 27 April 2019.