Yet again I have the pleasure of writing about Barb Jungr, after seeing her perform her latest collaboration with John McDaniel, ‘Float Like A Butterfly’, at the Pizza Express jazz venue The Pheasantry last night.

A brief re-cap: ‘jazz singer’ is possibly the closest short description of what Barb J does, but it’s nowhere near comprehensive enough. She's a gifted writer herself, but is perhaps best known as one our finest interpreters of song - especially those written by men, it seems. I think this may be because her ability to be robust and tender all at once is exactly what’s needed to find the chink in the chaps’ suits of armour. On justly-lauded recordings that focus on Dylan and, latterly, Cohen songs in particular, she dissects the bodies of work of these most inscrutable artists, performing a kind of open heart surgery on them, giving them new life. To see her live is to witness a masterclass of songcraft, storytelling - even stand-up. It's always struck me that - God forbid - if she ever fancied a break from singing, she could tour a spoken-word show and still hold the audience in the palm of her hand.

Her latest collaborator is musical director, producer, composer and - crucially for our purposes - frighteningly-accomplished arranger and pianist John McDaniel. They make a brilliant pairing, because what might at first seem like a case of 'opposites attract' - Barb J can be cheeky, outrageous, controversial and even confrontational, while John McD seems the model of unruffled urbanity at the keys - soon coalesces into something more intricate and complex, as their styles mesh into something uniquely affecting and compelling. She draws out his inner 'frontman'; he gives her the foundation to soar. (Onstage, she jokes that after expecting his professionalism to rub off on her, he's ended up adopting her bad habits!)

Previously, the duo created a set and accompanying CD of Beatles interpretations - which I wrote about at the time - but this new project is perhaps more left-field (of gold): the songs of Sting. (Hence the show's title.) In a brilliant introduction, BJ undercuts any potential eyebrow-raising by suggesting upfront people's reasons for not taking Sting seriously: daft name; too successful by half; and inevitably, the tantric sex. Personally, I could add more. My prejudice, I know, but as someone who listens freely across genres and quite likes it when musicians mix it up, I wish his foray into lute music hadn't felt quite so 'hobbyist'. And there's the pretentiousness: the sleeve-notes of '...Nothing Like The Sun' (even those three dots before the title! Aaargh!) are a high watermark of the genre - once read, never forgotten.

But - as BJ goes on to point out - look at his track record. A 40-odd year career, with way more than its fair share of unforgettable songs. And I could identify with this fannish feeling, too: I absolutely adored the Police, and I particularly cherish those first two Sting solo albums. They somehow combined his old band's 70s-into-80s pop nous with the restless feeling of a musician who wanted to stretch out a bit but couldn't quite settle on where, or how. I think this is how you end up with a debut referencing blue turtles in the title, and including bursts of late-night jazz, reggae and Prokofiev - so the world, buying it by the truckload, at the same time mutters, 'Oh come on, mate.'

But I also recalled certain Sting-related things I'd read - for example, the Police were such adept and versatile musicians that there are no guests at all - whatever the instruments used - on any of their albums. Or the fact that they performed on their reunion tour (still one of the most memorable gigs of my life) as a three-piece: stripped of any production mush, the songs were indestructible, in that sparse a format, in stadiums. 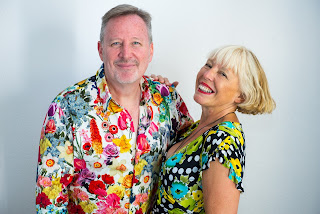 So it starts to become clear how two consummate reinventors of seemingly familiar music would be drawn to the Sting catalogue, identifying some of its most compelling highlights, drawing them out and nailing them down. As soon as the show started, it was obviously so special that - in the midst of my enjoyment - I almost started to worry that I wouldn't remember all of the great moments, the touches of genius that decorated every number.

I think the show differed slightly in 'character' from the Beatles evening, because those songs are already worshipped - if anything, they were re-examining the sacred. Here, you could detect a sense of missionary zeal as if aware that for some listeners, they would be making a case for the material. As such, they were a Formidable Unit. It's hard to imagine two performers more determinedly in sync. Immaculate two-part harmonies, sometimes sustained for virtually entire songs, inventively exploiting her deeper, fuller timbre against his lighter tones. Moments where BJ would embellish the basic tune - one I keep thinking about is the 'Confront your enemies, avoid them when you can' lyric from 'Englishman in New York', where on 'avoid' she found something else in the melody, and JMcD instantly mirrored it in his accompaniment, the songs seemingly effortlessly wrapping themselves around his fingers.

The arrangements were ceaselessly arresting. 'King of Pain', in its Police format, is a rigid, numbed song, and here both performers sang the tune with less predictable rhythms, pushing against the steady accompaniment and making it feel even more wracked. 'Roxanne' became a demonstration of the possibilities of serious cabaret... the pair first dialling the original's pop sheen down into the lament its subject matter merits, then - just when you think it couldn't travel any further - Barb J tells a story from her youth that makes a perfect, poignant fit. John McD continues playing - surely one of the hardest musical tasks in the word, to accompany someone who is simply speaking, without unbalancing the mood or masking the voice. With split-second timing, they break back into the song as if connected telepathically. 'Don't Stand So Close To Me' was breathtakingly sinister, the verse building and building the tension until the muted, repeated line of the closing chorus (under dim lights) suggests anything from resignation to psychosis.

On a personal note, I have to say that in places it was as if the duo had reached into my head and plucked out my favourite Sting songs. 'Moon Over Bourbon Street' becomes something definitively great, here performed by one of the finest vocalists we have, capturing the undead narrator's internal conflict, resignation, despair and ennui. And - in case you thought it was all doom and gloom - I was overjoyed beyond measure when they launched into 'Fortress Around Your Heart', a joyous, celebratory rendition that lifted the Pheasantry's basement ceiling a good few inches.

It was a magnificent evening. I think it's safe to say that everyone there left on a colossal high. It made me realise that firstly, there isn't anything these two cannot do. Secondly, and fittingly, it reminded me that this is a songwriter that has always aimed - at the risk of seeming too clever by half, on occasion - to reach both the brain and the heart together. In the care of this duo, however, he more than succeeded.

Some excellent news to end with - the CD of this show is on its way, scheduled for a June release, with the promise of more gigs to accompany it. I will shout more loudly about these on here (and on Twitter, too) nearer the time. In the meantime, you can keep track of Barb Jungr's live dates - and explore her many and varied other achievements - on her website, here.