It's been a week since I went to see the current revival of David McVicar's production of the Richard Strauss opera 'Salome' at the ROH - and I'm possibly still recovering.

I wasn't completely new to the piece - I'd seen a powerful concert performance at the Proms with a terrifying Nina Stemme in the title role. But I was looking forward to seeing how a fully-staged version would deal with the still-shocking ferocity of the plot's action: this time, there would be blood.

The opera takes place more or less in real time, and runs uninterrupted for a single act. Herod, ruler of Judaea, keeps the prophet Jokanaan (John the Baptist) a prisoner in the bowels of his palace. The princess Salome - daughter of Herodias, Herod's wife and sister-in-law - slips away mid-banquet and heads downstairs. Hearing Jokanaan bellowing his sermons and curses from his cell, Salome charms the soldier Narraboth (who loves her) into letting her see the seer. Consumed with passion for Jokanaan, Salome attempts to seduce him but is harshly rebuffed. She barely notices Narraboth kill himself with grief at witnessing her display.

Herod - accompanied by his fellow diners - arrives on the scene and lusts after Salome. Initially detached and resistant, Salome agrees to dance for him when he promises her anything she desires. After the notorious 'Dance of the Seven Veils', Salome declares she wants Jokanaan's head on a silver platter. Herodias - a target of Jokanaan's invective - is delighted, but Herod - who is spiritually troubled and intimated by Jokanaan's aura of divine authority - refuses, offering untold riches instead.

However, Salome does not waver. Eventually, Herod gives in and orders Jokanaan's execution. Salome finally crosses the line into obsessive insanity, cradling the severed head and kissing its lifeless lips. In horror, Herod has her killed as the opera ends. 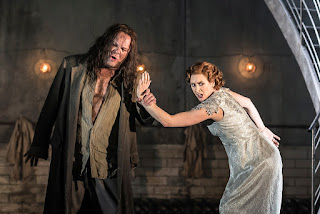 (Michael Volle as Jokanaan and Malin Byström as Salome, photographed for the ROH website by Clive Barda)

The ROH staging pulls no punches. Set in a slightly 'hyper-real' modern timeframe - characters in recognisable military/fascistic garb and country-house aristo black tie, but with executions meted out by enormous cleavers and prison doors sealed with chains and pulleys - we only catch a glimpse of the decadent feast above stairs. The main action plays out in the grimy expanse of the kitchens just above Jokanaan's dungeon. No-one entering this space leaved uninfected.

The set design seems to grow organically from the interior state of the characters (this reminded me of McVicar's astonishing staging of 'Pelléas et Mélisande' for Scottish Opera, which I was lucky enough to see last year). The prison cell is sealed by a circular lattice grille, on which the smitten Salome can sprawl like a predatory spider. However, the stairs also lead from the feast down to the main kitchen space through a circular aperture, mirroring the cell and identifying the overall stage area as a larger dungeon or tomb where the protagonists are trapped.

The production also exploits the one-act structure and relentless build-up of tension to give the opera a near-cinematic feel. Nowhere is this more masterful than in the 'Dance of the Seven Veils'. This instrumental section - essentially, at face value, a striptease - must present every director of 'Salome' with a conundrum. There have been productions where the soprano has, well, gone for it - while others have used dancers, or found alternative ways to interpret or illustrate it.

In a superb visual coup, McVicar uses the Dance as the only moment we escape the main set's claustrophobia. The walls explode apart and recede, allowing Salome to lead Herod through a series of rooms in suspended, semi-darkness. It's a full-blown. filmic dream sequence. As a possibly ironic double commentary on the salacious nature of the scene, it's Salome's psyche that's laid bare, as she tries on a series of costumes that reference stages in her life up to that point, including her likely abuse by Herod at a much earlier stage of her childhood. Her disturbed nature is already in place long before the opera opens. Parallels from cinema came into my head, much more so than other opera or stage works: Polanski's 'Repulsion', say, or even Miike's 'Audition'. (Malin Byström as Salome, photographed for the ROH website by Clive Barda)

There is as much intensity in the sound as in the visuals. The role of Salome herself is famously difficult - the ROH publicity repeats Strauss's quote that the part is for 'a 16-year old with the voice of an Isolde' - but Malin Byström is utterly convincing. Every aspect of Salome's fractured personality is there in her vocal performance - coquettish towards Narraboth, lustful with (the living) Jokanaan, steely and scornful with Herod and finally, searing, unhinged as she falls, drenched in blood, on the prophet's head. On top of that, her body language was brilliantly realised - agitated, slightly awkward (this is a teenager, after all) as she schemes to gain access to Jokanaan, but with real balletic grace for the dream-state Dance.

The support was equally fine, with Michael Volle a particular stand-out as Jokanaan. Like MB, Volle gave a memorably complete interpretation: his immense vocal power allowed the prophet to sound as commanding from deep within his cell as onstage - but physically, this John was a restless, caged animal, all shuffling, feral movements, hair mixed with brawn, barely able to tolerate the decadence around him.

An unforgettable evening, then, that will take you to dark places other than the auditorium - and as I write this, there are still some tickets left for the final three performances. Go if you can.