As can happen from time to time when juggling booking dates, I recently enjoyed a two-opera weekend - catching opening performances of Nico Muhly's new work 'Marnie' (English National Opera) and the Rossini behemoth 'Semiramide' (Royal Opera). For such an accidental and slightly odd juxtaposition, it was interesting to see these side by side: written nearly 200 years apart, but both placing strong women with dark secrets and murky pasts at their centre, asking the audience to understand and even sympathise with their passions and motivations. That both operas succeeded in doing this is a tribute to the productions and chiefly to the two mezzo-sopranos taking the lead roles.

'Marnie' is based on a novel by Winston Graham, itself far eclipsed in fame by the Alfred Hitchcock film it inspired. By all accounts, the book is a more melancholy, fatalistic affair than the movie, and it is this lower-key version that Muhly and librettist Nicholas Wright focus on. (This has led to at least one review I've seen suggesting that lovers of the Hitchcock film would inevitably be 'disappointed' by the opera - perhaps they would also, in their confusion at where they were, bemoan the lack of a big screen, special effects and popcorn? I tire of manufactured criticism like this, especially of ENO, very easily.)

The action of the opera is as much character study as it is thriller. Marnie is a career thief, with a tried and trusted MO: she gets a job, usually working with wages or accounts - then when thoroughly settled, steals whatever cash is on her employer's premises and flees. A new name, look and town - and the cycle starts again. But whatever kick-started this life of crime is rooted in some childhood catastrophe, and the action of the plot sees this repressed trauma finally break out on to the surface and bring Marnie to a kind of closure. 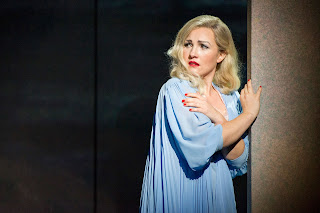 In the sense that the story turns on some major coincidences and contrivances, you could argue that it's perfect for opera. Marnie finally gets in too deep when she takes a job working for Mark Rutland, a client of the last employer she embezzled. Mark falls in unrequited love with Marnie, but because he works out what she's up to and catches her at the safe red-handed, he is able to blackmail her into marriage. As she won't consummate the union, he then tries to rape her. (The fact that Mark is the closest we have to a romantic lead helps explain why Marnie is by some distance the most sympathetic character in the opera.) However, Mark himself partly mirrors Marnie as the dysfunctional Rutlands provide their own subplot: he's a man in charge of a family firm but with no business acumen, saddled with his feckless brother and, crucially, still under the thumb of the iron-willed matriarch. Maternal issues also hold the key to Marnie's compulsions, and it's Mark who brings matters to a head by striking a deal with Marnie for her to undergo therapy.

Where the opera succeeds, I think, is that is fully engages - and illustrates on-stage - not just the cogs and gears of the plot but even more so, what's happening in Marnie's head. Marnie herself is tracked by four 'Shadow Marnies' dressed in bold, plain colour variants of whatever she is wearing. Not merely 'split personalities', but different moods, shades of her fractured psyche: in one riveting sequence where Marnie visits the analyst, they all dovetail among themselves to take turns on the couch, the 'real' Marnie becoming just one of their number, going neither first nor last. Equally, a troupe of male actor-dancers in grey suits and hats initially appear to close in on Marnie during the first robbery - are they police, or agents? - but in fact, they take on the more nebulous role of fate, or even conscience, as they recede as mysteriously as they came - sometimes moving scenery, or even providing abstract illustration for certain scenes, such as their fevered enactment of a fox hunt. 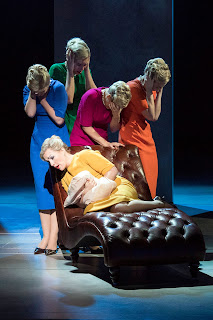 Most of all, while all the other characters interact realistically, Marnie gets to break the fourth wall, make eye contact with us, and confide her schemes aloud. Here is perhaps the best place to praise Sasha Cooke in the title role - possessed of a ravishing voice (playing a master of disguise demands that she 'colour' a number of different versions of her character, a vocal representation of the Shadow Marnies' visual effect), but also a brave, brilliant actor. Resisting any temptation to make us love or pity Marnie, she fully embodies her myriad contradictions - cold fury, cruel beauty, fragile strength.

Muhly's use of voice types created some intriguing character tension. So often, the female lead is a soprano: playing on the 'mezzo as villainess' cliché gave us the opportunity to hear SC's deeper, resonant tone envelop us more or less throughout the whole opera. Daniel Okulitch is a bass-baritone, giving Mark an air of steely capability that turns out to be entirely false. While counter-tenor James Laing, in a superbly volatile performance as younger brother Terry, could use his pitch to convey the dangerous unpredictability of an overgrown adolescent.

Overall, the score felt pacey and urgent - the use of strings to build suspense was in fact more or less the only thing that reminded me of the Hitchcock film, and I'm sure the nod was deliberate - but melodic and poignant, supportive of the singers and story. I was most impressed by the choral writing - it felt to me that Muhly understands full well the particular versatility and accomplishment of the ENO chorus and wanted to draw this out. The ENO choristers have always excelled in functioning as a fearsomely tight unit, but when needed, are able to flesh out every individual as an observable character in their own right. In their key scenes as workers or onlookers commenting on the action, Muhly mostly resisted a unison approach to give what sounded like 'pockets' of the chorus various comments at different times, creating a more realistic 'bustle' effect: the moment when they hit the pub and place their orders at the bar may have been welcome light relief, but truly sophisticated and memorable for all that.

I hope 'Marnie' finds its place on a recording and in the repertoire - it has lingered in my mind with a kind of implacable staying power in keeping with its title character's resilience. Please note - especially if you won't make it to a performance - that BBC Radio 3 are currently scheduled to broadcast it on Saturday 9 December.

In 'Semiramide', the crimes of the main character are writ somewhat larger - literally, in fact, as the opera is lavish in both setting and length, and some years before the action even begins, the Queen conspired with her confidante, Assur, to murder her husband, King Nino. Their son, Ninia, disappeared. I'm fearful of describing the convoluted plot, as I'm absolutely convinced I'll leave out something crucial. But in a nutshell (assume this is quite a large nut)...

Semiramide has to name a successor, who will both become king and take her hand in marriage. There are three main contenders: Assur, her old confidante, who expects to be rewarded for his faithfulness; Idreno, an Indian king; and the fearless soldier in charge of the Assyrian army, Arsace. Romantically, there are sundry complications: Azema, a princess seemingly destined for 'trophy wife' status among these nobles, is in love with Arsace. However, Idreno loves Azema and, while he would like the throne, would much rather marry Azema than Semiramide. In turn, Semiramide has tired of Assur's attentions and has fallen for Arsace. In fact, no-one likes Assur, primarily, it seems, because he's a dolt.

To cut a (really) long story short: Semiramide announces Arsace as the, er, lucky winner - but the ghost of the murdered King chooses this moment to make an appearance and rather ruin the atmosphere. The birds come home to roost. The High Priest reveals to Asarce that he is, in fact, the long-lost Ninia, saved as a boy by one of the brethren. As a result, not only is the marriage to Semiramide now impossible, he must also avenge his father. Inclined to spare his mum, he tells her the whole story and heads off to kill Assur. In turn, Assur, driven over the edge, vows to murder Asarce. In distress, Semiramide goes to pray and all three of them end up in the darkness of Nino's tomb. Thinking he is striking Assur, Arsace kills Semiramide by mistake. Assur is taken away, leaving Arsace to take the throne.

While it's easy to make light of the melodramatic mayhem, the opera easily transcends its storyline. From the opening moments, the score is gripping - the overture is very highly regarded and, by previewing some of the work's great tunes (the kind of technique we're more used to in modern musicals), presents you at the outset with a medley of sheer magnificence. Conducted by their boss, Sir Antonio Pappano, the Orchestra of the Royal Opera House played with tireless vivacity and variety, making a long opera seem much, much shorter. It's quite something to sit back at the end of any 4-hour performance and think - 'I'd happily just stay here and listen to that again.' 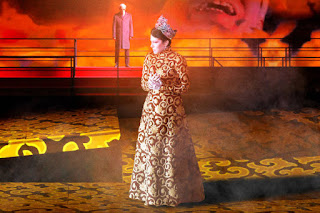 The production, by David Alden, relocated Babylon to a more modern, but still exotic, dictatorship: bright colours, military iconography. The costumes for the women in particular seemed intriguing, and meaningful: Semiramide moved from flamboyant regalia to a dark night-dress - not only showing the character's mental shift from ruler to potential lover, but underlining her vulnerability and forthcoming loss of power. Azema - shaved head and literally weighed down by her gold outfit - was the personification of a prize, untold riches to be given or traded.

With one (understandable) exception, the singers were phenomenal. While Semiramide is a soprano role, mezzo Joyce DiDonato sang with exquisite power, with the greater 'weight' to her voice arguably allowing her to embody the Queen's troubled complexity more completely. With Arsace also a mezzo 'trouser role' - here the superb Daniela Barcellona - their voices in duet seemed to blend particularly closely and lend a kind of audio-irony to the characters' initial ignorance of their being mother and son. Lawrence Brownlee sang Idreno with bravura agility and precision, and Jacquelyn Stucker - charged with a very physically demanding interpretation of the role (especially given the costume) - imbued Azema with both frustration and dignity.

The only slight technical hitch was Michele Pertusi as Assur in Act 1, who seemed quiet - no wonder, it turned out, as he had fallen ill. (He had already replaced Ildebrando D'Arcangelo in the role, so hopefully this isn't the curse of Nino working its way through a succession of basses.) At the interval, Mirco Palazzi took over at short notice and sang the role with much greater, er, 'Assur-ance'. [Eh, readers?] In an opera that revolves around strong female voices, Assur is one of the much rarer male roles to have a full-blown 'mad scene', and I feel grateful to have heard it given by someone on peak form.

Two real events, then: a handsome world premiere, and a triumphant production of a marvellous, if all-too-rarely staged classic. I'm now aware that this post might almost be long enough for Rossini to set it to music - so I will end here.