Soul music: 'Gerontius' at the Southbank

Let's hear it once again for the singers and players of English National Opera (ENO). Following the recent positive news that the company has now been restored to the Arts Council's National Portfolio, hopefully more stable times are ahead for the Chorus and Orchestra after what must have been a seemingly endless spell of uncertainty.

That said, the ensemble seem to have responded to ENO's behind-the-scenes issues by giving increasingly thrilling and unforgettable performances - not just as part of the regular season but in a series of 'breakout' events. These have taken them out of the confines of their home venue - the London Coliseum - and potentially to new, inquisitive audiences. They took an English version of Brahms's German Requiem on a brief tour of London churches. More recently, they organised and performed two short operas for the ENO Studio Live project: small in scale, large in ambition, 'The Day After' (read my write-up here) and 'Trial by Jury' showed off to perfection their talent, enthusiasm and versatility. Given in an auditorium carved out of a large space in their West Hampstead rehearsal studios, ENO Studio Live - which we're promised will return next year - brought a kind of rogue, maverick sensibility entirely in keeping with the company's expertise and objectives: accessible, engaging material that still stimulates and challenges the eyes, ears and mind.

Last weekend, they presented something different again: Elgar's 'The Dream of Gerontius', performed at the Southbank Centre as part of its choral festival. Part of the publicity blurb referred to its being 'staged'... which was perhaps the wrong word to pick: but more of that later. 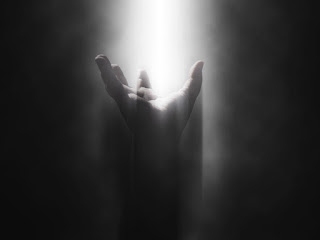 'Gerontius' does not normally have a staging of any kind. It's a choral work, but certainly not an opera and not even really an oratorio (like the 'Messiah'). Its dramatic impetus, so to speak, is of a man's journey through death into the afterlife - namely judgement, purgatory and the promise of eternal life. (Elgar took extracts from a longer poem by Cardinal John Henry Newman for his text.) However, at the same time, it seems to combine spiritual meditation with ecstatic imagination.

In the first, shorter part, the dying Gerontius is surrounded by 'assistants' (his friends and attendants) and he is blessed by a priest. As he 'crosses over' and the work moves to its longer second section, the same double chorus return as choirs of angels and demons, and the Angel of the Agony intercedes for Gerontius's soul to pass through purgatory into heaven. Both the priest and Angel of the Agony are written for low male voice - while they could be portrayed differently, most productions cast the same person. This seems telling: Gerontius is fading into unconsciousness in part 1, and is a disembodied Soul in part 2 (he can't see the cackling demons). He doesn't look, he listens. Perhaps this is why Elgar wrote a purely choral work: it's a 'vision', but for ears, not eyes, with Gerontius seeking some continuity into the next world (at one point, he hears his praying friends' voices amid the celestial chorus).

However, he's not alone, as his heavenly guide - the Angel (not 'of the Agony' this time) - steers him towards glory. The work builds and builds until Gerontius undergoes judgement - a momentary encounter with God - in an overwhelming orchestral climax, soothed by the Angel's gentle promise to return for him when his purgatory is over. As befits this reconciliation between suffering and paradise, Elgar's music makes anguish beautiful, the contrast between moments of quiet and resounding, overlapping waves of harmony (or dissonance) keeping the listener both riveted and comforted. 100 or so minutes - no interval - felt more like ten.

I thought this performance had the feel of a real event to it - certainly it was a celebration of all things ENO. The excellent soloists were all familiar to me from ENO productions first and foremost: Gwyn Hughes-Jones (Gerontius) a winning Walther in 'Mastersingers', Patricia Bardon (Angel) so powerful in the title role of 'The Gospel According to the Other Mary' and Matthew Rose's tender Marke in 'Tristan'. Each made their mark fully on the work this evening: GHJ a sustained sense of wonder and resolution; PB's warm voice like a balm for the senses - and absolutely unforgettable work from MR, especially in his first appearance as the Priest, somehow harnessing a typically tender, sensitive interpretation to a resounding volume that seemed to make the hall itself expand.

ENO's Orchestra, under renowned conductor Simone Young, and as ever the mighty Chorus - here forming a kind of super-group with the fine BBC Singers - did what they do so well on the operatic stage: become characters as necessary (here ranging from angelic to satanic), inhabit the material as individuals or groups, while remaining fearsomely tight as a whole unit.

Finally, a few words about the 'staging', which - to be honest - wasn't. ENO didn't force any extra narrative or unlooked-for interaction between the soloists. More accurately, it was a lighting concept - conceived by the designer Lucy Carter. Essentially, the visuals were restricted to a bank of lights looming over the stage, directing precision beams or rays at various participants at crucial moments. Of course, what this actually meant was that for most of us, the experience was one of darkness, rather than light. We couldn't read the text in our programmes, which I rather liked: in the same way as when ENO Studio Live dispensed with surtitles, it forced you to focus on the words as they are sung, and surrender more fully to the music. Arguably, a more conventionally-lit 'straight' performance would have included more visual distractions than this pared-down limbo (appropriately enough).

The opening seconds were supremely effective - as a single beam shone down on Young, ready to begin... as if a sacred energy was about to be channelled through the conductor to the orchestra and singers. After that, it did take me a good 5 or 10 minutes to get used to it - but I found my efforts were rewarded. I rather enjoyed - in the absence of following a text - the way we were 'directed' to look at the chorus as they were variously characterised by ultra-violet or white light, seeming to ignite their white shirts. Tumultuous instrumental passages were accompanied by beams ranging across the orchestra. I'd be interested to know if anyone with synaesthesia in the audience felt that these colours complemented, or contradicted, what we were hearing.

But just as Gerontius is taken from life, this visual treatment took us from the concert hall. It wasn't a classical concert, Jim, as we know it. It did feel like a kind of suspension, with the swirling music pressing down on us, or propping us up.

I've seen some social media discussion since where some folk have been rather dismissive of a 'staging' (or what you will) like this. I won't name names or anything: these are all people I respect and admire, and that fact that I don't agree on this particular issue doesn't change that one iota. But the recurring themes were along the lines of: It's not an opera/oratorio - it doesn't need this kind of treatment, why do it? It was never intended to be performed this way. All stagings of choral works along these lines are hopeless. And so on.

*Sigh*. Sometimes I do think it would be nice to think in these kinds of absolutes, but I just can't do it. For a start, I think the question of how works are 'intended' to be performed is highly nuanced - particularly since you cannot assume anything about a composer's non-existent 'future' - the whole "if Mozart was around today, he'd be writing techno!" business. I like to think he would give it a go, but we just don't know. The situation is impossible to construct. Anyone writing operas before the age of recording 'never intended' us to listen at home without any acting or scenery. Anyone writing on early instruments 'never intended' us to play their pieces on modern ones. But we just disregard all of this: partly because it suits us, but partly - surely - because the music comfortably survives these variations.

If we can have concert-only performances of operas, I don't see why we can't have visually innovative versions of 'Gerontius'. We don't know if Elgar would approve or not, and it doesn't matter. Traditional performances of the work will always take place, as I hope this one will again - plenty of room for both.

ENO, in particular, looks to engage and stimulate its public. Just like ENO Studio Live presented opera with an almost punk sensibility - not just in style but in circumstance - so this 'Gerontius' touched on aspects you might associate with theatre or cinema, or perhaps a rock gig, where such lighting is the norm. This can only enhance interest from people who might not want a classical concert in pure classical concert form. Before anyone lets their pince-nez drop in horror, I'm not talking about the dreaded 'dumbing down' cliché, or starting each symphonic performance with the conductor shouting 'Good evening, Barbican!'

The way to embrace a newly-intrigued audience is, I'm convinced, not to radically change everything about what you do - but to illuminate why what you do is not so very different. ENO and co did not 'add' to Elgar's masterpiece anything that wasn't already there in the music - but they laid it out before us, gave it a new dimension, identified a way of seeing and hearing 'Gerontius' that guarantees some of us will be talking about the performance's power for some time to come. Keep doing this, ENO.