From harmony to discord: Myrthen Ensemble / 'The Exterminating Angel'

I won't forget Saturday 6 May 2017 in a hurry. Thanks to my haphazard attempts at the usual intricate rocket science (or 'booking', as some people call it), I was packing out the day with not one, but two musical events: a lunchtime recital, followed by the opera in the evening. But it was no ordinary recital, and no ordinary opera.

At Wigmore Hall, the Myrthen Ensemble were taking their turn in the venue's epic concert series 'Schubert: The Complete Songs' (I'm trying to get to as many of these as possible). Most of the gigs so far have featured voice/piano duos, apart from a few exceptions where veteran accompanist and Schubert guru Graham Johnson brought together several soloists at a time to tackle some of the lieder for more than one singer.

This, though, was different. While the multi-participant sessions I mention above inevitably had a slight 'scratch band' feel to them (and no less enjoyable for that), the Myrthen Ensemble are a 'proper' group. Although, as their membership is made up of accomplished soloists, you could use the word 'supergroup', even. At their centre is pianist Joseph Middleton - regular Specs readers will know I'm an admirer of his playing, in particular his work with Carolyn Sampson, but his obvious flair for collaboration is no doubt crucial to the dynamic of this larger band.

The founding vocal line-up alongside JM is Mary Bevan (soprano), Clara Mouriz (mezzo), Marcus Farnsworth (baritone) and Allan Clayton (tenor) - although guest singers also feature, and when I've seen them live (including this occasion), Nicky Spence has taken the tenor spot. Their superb 2016 debut release, 'Songs to the Moon', was a double disc, bringing to mind the obvious comparison with Frankie Goes To Hollywood. [*needs work*] 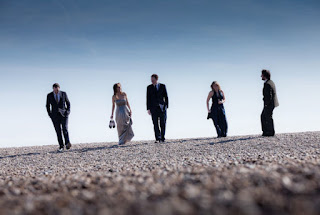 (This brilliant photo, from the album cover sessions, I believe, is by John Alexander.)

This is so good a team that choosing highlights was impossible, and it feels totally unnecessary to single anyone out from a group with such a warm rapport. While they all got to sing solo or in various combinations, it was an utter joy to hear the four-part selections, as in the closing 'Gebet' and 'Der Tanz'. One gift they all share is the ability to communicate their own individual styles even when singing together, so if you wanted to 'follow' one of them for a while - MB's shining tone at one end, MF's crystal-clear basslines at the other, or CM and NS providing the rich colours in between - it was quite easy to do so. I just found myself locking into one voice after another, and never once began thinking in terms of 'preference' - only about how well the overall sound was working.

The occasional glance to the side of the stage, where the singers not 'on' at any given time were sitting, showed them as avid listeners, with as much invested in their colleague's performances as their own. I hope these particular stars align again soon, especially if there's room in schedules for recording: a follow-up album would be very welcome.

Slight change of mood, then, in the evening, for Thomas Adès's latest opera, 'The Exterminating Angel', at the Royal Opera House. The intriguing plot - if that's the right word - is closely based on the 1962 film of the same name by surrealist Luis Buñuel - so, if you've seen neither the opera nor the movie and want to avoid spoilers against a potential future viewing... please stop reading!

To sum up the scene: Edmundo and Lucia, the Marqués and Marquesa de Nobile, are hosting a post-opera dinner party. The guests are all either fully aristocratic or at the very least part of the well-to-do upper class - with the possible exception of Leticia, the lead soprano in the opera the party have been to see, invited as a guest of honour. By contrast, the servants - seemingly gripped by a collective unease - leave the house just as the dinner gets going, abandoning Julio the butler to attend to the guests' demands by himself.

In a disconcerting opening sequence that confirms something is amiss, the guests arrive twice - as no-one as there to take their coats, they circle round back towards the door and re-enact the same movements. However, after dining, they head to the main drawing room for music: Blanca, one of the guests, plays piano and they urge Leticia to sing some more. But as the night wears on, one thing they don't do is leave - even though they are not locked in, or incapacitated. And the more they think about, or discuss leaving, the greater their inertia, and the longer they stay put. Days pass - and we see the servants, and eventually the military arrive outside to carry out a rescue... but they too succumb to a kind of paralysis and can't bring themselves to enter the mansion.

The aristocrats' disintegrating sense of decorum is savagely satirised - early on, the women are uneasy that the chaps are removing their jackets - but before long, they're all sleeping on the floor in the same room, unwashed, all sense of good manners in tatters. The true nature of some of the characters' relationships and situations is revealed, and several of the guests don't make it out alive. Finally, Leticia notices that for the first time, they have all somehow arrived back at the places they were all standing when they became 'trapped' (in an echo of the 'double' opening). Running through the movements again, they find this has broken the 'spell' and they cautiously, but successfully, leave the room. In a superb twist ending, the staging then has them meet the rest of the cast outside the house - the returning servants, the army, the townspeople and so on - only for the whole ensemble to find they can't leave the stage. (I think this is a supremely clever alternative to the film's ending, where the aristocrats give thanks at church for their freedom only to disappear among the congregation - who then discover they are trapped in the church. The movie closes with a brief scene of fighting on the streets, followed by sheep being led into the church as gunshots are still heard on the soundtrack.)

The choice of this particular story for an opera is itself a stroke of genius, as it conjures up certain kinds of tension that feel rather new: for example, instead of a traditional opera being given a modern, controversial makeover, the subject matter here is so 'out there', it almost demands to be told straight. Indeed, within the confines of the room, we witness love, sex, death, incest, attempted murder, potential human sacrifice and double suicide... so the high-octane emotions and actions are quite enough to stand shoulder to shoulder with any grand (guignol) opera. 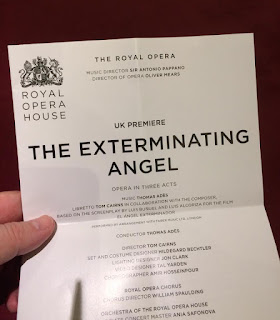 (This brilliant photo, of my crumpled ROH cast leaflet, is by me.)

Adès seems to thrive on these tensions musically (he also conducts these performances) - woven among the orchestra, we hear - at various relevant points - the early (and eerie) electronic keyboard instrument the ondes Martenot, what sounds like a full-blown drum kit undergoing some serious punishment... and a delicate Spanish guitar. The score feels extreme - not as in difficult or alienating, far from it - but relentless and provocative. He places some of the most intense characters at the wide points of the vocal range, which increases the sense of strain and panic. In this, he's aided immeasurably by a heroic cast. Amanda Echalaz as Lucia and Audrey Luna as Leticia negotiate some astonishingly high passages, and Iestyn Davies - so good in roles requiring some edge and menace to undercut any 'angelic' countertenor clichés - was hugely impressive as perhaps the most dangerous loose cannon in the room. At the other end of the audio spectrum, the closest the opera gets to a bedrock of sense and sanity is the doctor, sung by John Tomlinson in his subterranean bass.

But I mention these folk first largely to make a dramatic point, because all told this was an absolute luxury cast, working as an ensemble - like the recital from earlier in the day, I don't want to single anyone out! Ed Lyon and Sophie Bevan (sister of Mary from the Myrthens - allowing me to achieve a rare 'double Bevan' in one day...!) generated frantic chemistry as the doomed lovers. A further array of arresting, characterful voices - Thomas Allen, Frédéric Antoun, Sally Matthews, David Adam Moore, Anne Sophie von Otter, Christine Rice and Charles Workman - all fleshed out the guests' various collapses into convincingly three-dimensional distress, each wrestling with their individual secrets and demons. Apologies to anyone I've accidentally missed out, because the teamwork on display here was remarkable: jointly ratcheting up the mood until almost everyone reaches breaking point together, negotiating some intricate stagecraft - and still sounding so convincing. Bravi, in all sincerity.

The final layer of magic was the inventive staging. Fitting the story's black comedy, there were some winning visual and aural coups. Before we went in, a tolling bell filled the ROH's passageways, and a small flock of real sheep were already onstage. (They eventually turn up in artificial format to become dinner for the starving aristos.) Later in the action, two characters - dead by their own hands - were dragged offstage, then the false pool of blood they lay in was dragged off after them. And the 'door' of the room itself, impassable and implacable, was a huge empty gateway, with literally 'nothing' keeping the characters in their self-imposed prison. This revolved depending on which parts of the house we needed to see.

What did it all mean? Well - a common interpretation would suggest that the toffs are the ruling class / bourgeoisie, whose ivory-tower inertia will spell their end. But - and this seems to be Buñuel's original, open intent - it resists a thorough-going explanation. The collapse of 'society' inside the room can reference all manner of dystopian fiction (as a William Golding nut, I thought of 'Lord of the Flies'), and it may all come down to little more than 'we're all doomed!'

Given current world events, perhaps this is what made the opera feel like such an urgent piece of entertainment - but with its snappy, economical text and haunting visuals (both courtesy of librettist and director Tom Cairns) and Adès's ceaselessly inventive music, it was an exhilarating way to ride out the horror.

Stop press: Thrilled to note that in the week or so since I saw this rather unusual 'double bill', Joseph Middleton has been given the Royal Philharmonic Society 2016 Young Artist Award... and 'The Exterminating Angel' - for its initial performances in Salzburg with the same cast and production before coming to London - won 'World Premiere' at the 2017 International Opera Awards. Both richly deserved.