Last week, I went to see a concert performance at London's Barbican of John Adams's great 2005 opera 'Doctor Atomic'. Since current world events have turned our attention all over again to nuclear weapons, this portrait of Oppenheimer and his colleagues in the run-up to creating the first atom bomb felt queasily topical.

The gig itself is rooted in a far happier enterprise - celebrations for John Adams's 70th birthday, and the conductor himself was here to conduct the BBC Symphony Orchestra, plus the BBC Singers and a group of fine soloists. This team are underlining the opera's place in posterity. The concert followed recording sessions for the Nonesuch label - exciting news: while two productions have made it to DVD, I'm not sure there's an existing CD version. And this performance was recorded to go out in the near future on BBC Radio 3 - which means it will also spend a month on iPlayer. So, if you're at all curious to hear 'Doctor Atomic', you'll have no excuse for missing it!

But you won't need one. It's a shining, shattering work - exhilarating and ultimately devastating. The opening scenes of the opera take place the month before the first atom bomb test, when the terrifying implications of what they have created are fracturing the bond between the scientists. Oppenheimer's colleagues Teller and Wilson both have grave fears about the weapon, with Wilson potentially agitating the team against its use. Oppenheimer warns him against interfering in politics, but is himself profoundly troubled, as the following scene at home with his wife Kitty shows. We then fast-forward to 15 July 1945, the night before the test. Weather conditions seem about to scupper the exercise, but the formidable General Groves will not countenance any delay. Over the remaining 24 hours of the story, we move between the test site and the Oppenheimer residence, where Kitty and the family's Native American maid Pasqualita remain. As tensions rise, the bomb is finally detonated, and the final sounds we hear are voices of Hiroshima survivors (where, of course, the bomb would be used in anger only a few weeks after the test). 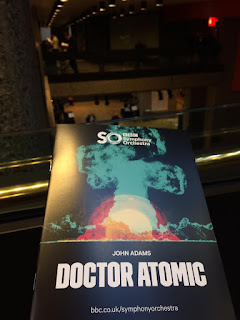 The libretto, part-written/part-assembled by regular Adams collaborator Peter Sellars, weaves together speeches, thoughts and opinions from existing documents by or about the characters concerned, with quotations and allusions to poetry and myth outside the 'reality' of the opera's scenario. (I was reminded of the similarly wide-ranging balance of the mystic and realistic in the two Adams/Sellars oratorios, 'El Niño' and 'The Gospel According to the Other Mary', which I also love.)

What makes this technique particularly appropriate for 'Doctor Atomic' is that Oppenheimer was a well-read man particularly drawn to poetry - so in his moments of highest anxiety, it is only too fitting that he retreats into his beloved verse. The key highlight here is almost certainly Oppenheimer's aria 'Batter my heart', which is a setting of a John Donne poem that articulates the torment of one wracked between good and evil. Poetry and storytelling link Oppenheimer to his home and family: Kitty's first appearance is unexpectedly sensual, as she tries to soothe and rouse her husband out of his gloom with the words 'Am I in your light?' - actually a quote from a poem by Muriel Rukeyser.

Listening closely to the words heightened my awareness of the voices. This may sound facile, but bear with me: it's easy to take certain operatic vocal conventions as read without thinking about them too hard. Often, the hero is a tenor. Often, the villain is a bass or baritone. Often, the heroine is a soprano. And often, mezzos are cast as femmes fatales or blokes, giving rise to the 'witches, bitches and britches' line. Obviously, these are not universal, but they're the case routinely enough to become clichés of a sort.

But I was newly struck here by how Adams had the characters' registers fit their mental state and role in the drama. Teller (Brindley Sherratt), nearly crushed by the weight of his fear and knowledge, sings in an ominous bass - as does the immovable, ultimately responsible General (Aubrey Allcock). Oppenheimer (Gerald Finley), suspended between breakdown and release, holds the piece together with his fleet baritone. The other baritone role is Hubbard (Marcus Farnsworth), the weather forecaster, who must also - at a more modest level - sing the line between expert self-assurance and uncertain conscience. The tenors are those more or less given over to panicked action or drama: Wilson the rebel (Andrew Staples) and Nolan (Samuel Sakker), the captain who tries to give Groves graphic warning of the bomb's effects. In all, the men's roles convey the unbearable claustrophobia - both physical and mental - of their situation.

Where any release is possible - however short-lived - the two women provide it: Kitty (soprano Julia Bullock) attempting to lighten her husband's spirit, and let some space into the sound; Pasqualita (mezzo Jennifer Johnston) voicing the warmth of home. As the countdown continues, both women's psyches will be as profoundly affected as the men's.

I found the soloists uniformly excellent. Although - and who knows, possibly because - they had to stay relatively close to their positions, their singing and movement were so convincing that I didn't for a second wish it had been fully-staged. Clearly working as a tight ensemble (brilliant to look forward to their recorded version), the adrenalin of performance seemed to translate perfectly into the tension of the opera. From small touches of characterisation (I'm still thinking about Finley's omnipresent cigarette and Staples's flimsy leaflet), to carefully-controlled body language and exchanged glances - every performer made an indelible contribution that supported the others. And it would be remiss of me not to award lofty praise to the BBC Singers who, as chorus, chanted both pure science and apocalyptic visions like a single horror-struck organism.

None of this would be possible, of course, without Adams's score. As a fully paid-up fan of his work, I was expecting to like and admire it, but I hadn't banked on being so profoundly moved or disturbed by it. While parts of 'Doctor Atomic' are undeniably beautiful, there is sonic terror here, too: layer upon layer of sometimes grinding, pulsing intensity that place you mid-maelstrom. The BBC Symphony Orchestra, in a suitably vast incarnation, visibly (and audibly) relished the chance to play the piece for the composer as if their lives depended on it. I don't think anyone there that evening is likely to forget those closing moments, a kind of horrified catharsis as the explosion faded and the players turned their lights out one by one, leaving us in a moral, as well as visual, void.