Music into Words 1: What Specs said...

Yesterday (Sunday 12 February), I had a fantastic time taking part in the second 'Music into Words' conference - focusing on writing about classical music - which I previewed here. It was a privilege to be part of a panel whose learning, experience and insights have given me so much to think about. As soon as possible, I'll post a follow-up piece telling you all about it - and include as many links and references as I can muster, so that you can find out more about the personalities involved and the topics covered.

In the meantime - to keep a bit of the momentum going - here is the talk I gave. (Obviously, I roamed from the script occasionally due to mild nerves and the occasional over-enthusiastic hand gesture - but this is essentially what I said.) I was there to speak about amateur blogging - how I got started, why I do it, and what I thought the whole enterprise was for... I hope you enjoy it. 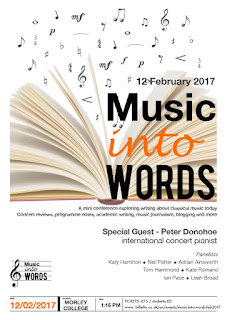 Some of you here – if you like reading about music across a range of genres – may remember ‘Word’ magazine. It's long gone now, but it encouraged its readers to post reviews and articles on its website that the mag would cherry-pick from and publish - and I got a couple of pieces printed.

So, this was when I realised how much I enjoyed trying to put how music made me feel into words. It added another layer to a CD, or made a gig live again. I do actually write for a living, but about finance, benefits, tax and so on. While I’m sure that many of us do get quite emotional in all sorts of ways about tax, we’re not talking about the rarefied high that music can give us.

Eventually, something ‘unlocked’ and I became ‘ready’ for classical music. I had married someone who loved choral music and we began to go and hear it seriously. A friend of ours, devoted to the Proms through his three favourite things in life - grandeur, classical music, and Pimms - started getting us along to those, which in turn got me more familiar with Radio 3.

Meanwhile, in record shops like Rough Trade, I would stray into the modern composition section and hear the likes of Adams and Glass, who spoke to me instantly. Of course, it's a simplification to say a composer like Philip Glass is bound to appeal to rock fans because of riffs and repetition – but I have often been simple. I am hooked by hooks. I’m an opera nut now, not thanks to a Tosca or Traviata but the Proms performance of ‘Nixon in China’ in 2012. Then Mr Pimms suggested I 'Prom' with him at Barenboim's entire Ring Cycle in 2013 - a literal 'baptism of fire', standing at the top of the world's largest steamer, immersed in that sound... After that, there was no going back.

And it hasn’t escaped me that favourite kind of classical music – art song – appeals to me so much because I can’t help but hear it underpin all those other songs that came later. Whatever links and connections along these lines may be already obvious to anyone steeped in classical music, to someone coming from the 'rock' side, they're like a series of epiphanies. Then, finding that many of classical music's elements pushed the same buttons – that there really was no need for it to be separate – made me realise that I would end up writing about it, and in such a way that it would not have to be separate. And since I had no idea where, I decided to start my own blog.

Amateur blogging comes with pros and cons. I can write whatever I like (within libel laws) – but of course I have no ‘credentials’ – I’m aware that I back up my thoughts in a non-academic, perhaps more speculative and descriptive way; I'm learning in public. I’m not a critic, I’m a punter. As a paying customer, I tend to go only to events I expect to enjoy in the first place. So, while I am always completely honest, I never call my posts ‘reviews’. I enjoy the luxury of focusing on works and performances I like, or love, and aiming to spread some of that joy

It is hugely rewarding to be unashamedly enthusiastic and evangelical about particular artists or composers one likes. Anyone reading ‘Specs’ will know that I champion certain artists – like Jo Quail, for example. She’s a cellist who composes her own music for electric cello and loop station – her pieces build in layers that she can re-create live, in real time. She self-releases her own albums, and thanks to her 'underground' rock background, she’s as likely to be found supporting bands in an Islington goth night as she is staging her own concerts in churches and concert halls. I see her as 100% contemporary classical, but totally under the radar when it comes to labels like NMC or a a venue like the Wigmore. And these artists that fall between the cracks in the music scene, also do so in the music press, and I feel it’s up to me – us – whatever our personal causes, to get them out there to wider attention.

So… No rules! No editor! And of course, no readers – not for some time, although it’s a pleasure to see ‘Specs’ building up its audience now. It is, of course, completely Adrian-shaped - an online self-portrait. It is mostly about classical music, because I'm mostly 'about' classical music – but I also write about anything else I feel like including.

I’m comfortable with that because I think my core readership, if I have one, is ‘me’ – or at least the ‘me’ of five to ten years ago. Always looking for the ‘way into’ other music. One of the best reactions I get is when someone I might already know through a rock or folk connection feeds back on classical piece I’ve posted – ‘that sounds amazing, never heard of him/her/it but I’m checking them out after reading that’. That's always the aim.

Those here of around my vintage will remember when we had more Megastores – those huge record shops – and the classical section was often in the basement, behind glass and a closed door - maximum isolation - as if the sensitively-eared needed protection from the cacophony outside.

It worried me at one time that classical music media was at a similar remove. What was the ‘way in’? Now – seemingly when the rock press is headed for oblivion more quickly - I'm really encouraged to see BBC Music Magazine including jazz and world music in its reviews (again, reflecting programmes like 'Late Junction' on Radio 3), and Gramophone seems to be following suit. Online, it will be thanks to events like this and up to all of us, I think, to keep sharing our enthusiasms and tell each other what's out there. I’d like to think that, even in its own small and irregularly-updated way, ‘Specs’ is helping to hold the glass door open.
Posted by Adrian at 11:01