House calls: the greatness of 'Together Alone'

I note with wallet-troubling interest that Crowded House have re-issued all their albums in rather posh deluxe editions, each with the now-customary extra disc of demos, rarities and the like. A longtime fan of the band, these are going to sorely tempt me. One album in particular - their fourth, 'Together Alone' - has a particular place in my heart.

I was first introduced to the group when some friends of my parents - then living in Australia - came to visit and brought some music over for me. I was in my mid-teens, and teetering on the precipice between only hearing chart stuff and plunging into a John Peel-fuelled underworld of indie, metal and techno. The visitors were pretty sure I would love the John Farnham album (nope), but almost as an afterthought, they had brought along Crowded House's self-titled debut. I was captivated by it at the time, no doubt because it is just so endlessly melodic. Not only that, but for a proper rock album by proper rock people, it feels unexpectedly playful and joyous: the jaunty piano break in 'Hole in the River', for example, totally belies the poignancy of its subject matter (a family suicide).

However, as Crowded House continued - and I grew older and more musically aware - it became increasingly clear what a strange band they were (and are, I hope). For those of you unfamiliar with CH, they are led by Neil Finn, who cut his teeth in his older brother Tim's band, Split Enz. (The Finn brothers are New Zealand songwriting royalty, and whether in or out of their own bands, or simply playing and recording as a duo, their musical paths are inextricably woven together.) Crowded House emerged in Split Enz's wake, and had I known much then about the earlier group's eccentricity, none of CH's oddities would've surprised me in the least.

I won't dwell on their first three albums here (or their later ones, when they reformed after a hiatus), but every CH record has something to recommend it - especially if you like your beautifully-wrought tunes enhanced with seemingly small but rewarding and somehow subversive details. 'Temple of Low Men', for example, contains the unforgettable 'Into Temptation', a ballad that subverts a potential love theme into the threat of infidelity - the second time you hear the line "the cradle is soft and warm", the vocal stops abruptly mid-verse, the rug is pulled from under your feet and you are yourself seduced by the unexpected strings. Or on 'Weather With You' - a huge hit from the 'Woodface' album - you hear all the verses and middle eight before any hint of the chorus (it was remixed into a more conventional order for the single release).

However, for all the leftfield touches, the production on those albums - in my opinion - locates CH firmly in the mainstream. They are crisp, bright albums - whatever their darker undercurrents, they sound full of verve and eager to please. 'Together Alone', which came next, is something rather different. 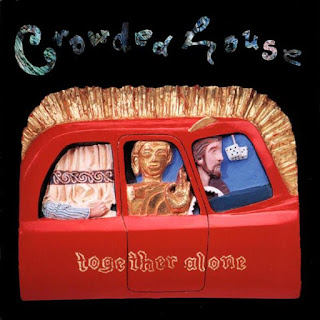 For all that I liked CH, I hadn't followed them too closely since that first record. I was an indie kid throughout my teens, feeding my ears distortion and disaffection: the furious electric engine of The Wedding Present, the primal howl of Pixies. A student in my final year by this time, I wandered into the local HMV most Mondays to look at the new releases - and I heard a gorgeous swirl, punctuated by a delicately picked hook, fill the shop. Completely confused - nothing in the 'just out' racks seemed to fit what I was hearing - I asked the till chap what they were playing. 'The new Crowded House,' he said. I blinked. Unsuccessfully resuming my cool browser pose, I picked up the CD and checked out the track listing. I worked out we were more or less near the start of the running order and stayed in the branch listening for as long as I felt I could, as one instantly memorable track followed another. I knew I had to buy it. And it's never really left me since.

I can say, for example, that it's the album that got me through my finals. Its extraordinary knack of expressing angst and aggression where necessary - before absorbing it back into an overall aura of serenity and harmony - made it very therapeutic listening for a stressed-out, revision-ravaged twenty-year-old. And on the subject of therapy, I also found out CH's latent power to forge bonds, as friends emerged as fellow fans. In our various ragged collectives that we occasionally, optimistically called 'bands', many happy hours were spent trying to cover the record's slippery, secretive masterpieces. I think the little finger on my left hand is still recovering its correct position from the hours spent practising a cobbled-together - and no doubt utterly incorrect - version of 'Pineapple Head'.

But what is it about 'Together Alone' that hooked me so instantly, and permanently? To start with, as facile as this may seem, it was the album's sound. It simply doesn't sound like any other CH album - and, to my knowledge, like very few other albums by anyone. After working with Mitchell Froom on their previous albums, the band brought in Youth as co-producer. Perhaps this was a surprising move, as Youth (given name Martin Glover) is the bass player in Killing Joke. But as soon as you know this, you can hear his input. 'Together Alone' is cavernous. I might have been minding my own business in a high street HMV, but I was gathered up into the album's arms - it had me surrounded.

Also - and this makes a lot of sense given who was at the controls - Nick Seymour's bass takes a central role. An immensely fluid and intuitive player, NS creates basslines that lurch or leap as required. With an unerring instinct for filling spaces in the mix, he punctuates some of the tracks with engine-like runs of notes that 'rev up' the songs and urge them forward. The combination of the surround-sound and emphasis on the bass give the album a slight 'dub' feel, which only adds to its enveloping allure.

The track I've already mentioned, 'Pineapple Head', is a superb example of this - during the verses, the bass is essentially the lead instrument. The song also demonstrates another magnetic quality to Neil Finn's songwriting - his flexibility within songs to just follow what he thinks works. If a verse could do with being a bit longer than the others - let's do that. If we want to end each chorus differently, that's fine too. His melodic gifts are so strong that the overall tune lodges itself in your brain anyway - but the tweaks along the way are what make you repeat-listen. In 'Pineapple Head', the first two verse-chorus sequences run as you might expect: however, the third chorus is lengthened with extra lyrics to build up a new series of backing harmonies - then it retraces its steps with subtle changes along the way until he reaches the last line again and adds a cry of release.


The track that perhaps holds me most spellbound of all is 'Catherine Wheels'. A delicate, melancholy verse resolves into a gorgeously affirmative major chorus (0:55 in the YouTube video) that dies away back into the verse almost as soon as it arrives (1:08). The second verse, though, is half the length of the first - while the second chorus is longer - only by a single line, but it makes all the difference. It propels the song into a blissful, transition section (2:04), featuring a glorious wordless choir and an almost indefinable shift towards a slightly funkier rhythm. A chiming riff that has been a hovering, gentle presence in the choruses gradually asserts itself and comes to the fore (2:50). Car-engine bass (3:03 onwards), and the lead vocal returns, cutting across the 'wrong' part of the figure, a little out from when you'd anticipate. Suddenly, piece by piece, we've been taken into a new song, listening to an even more bewitching melody than we started with. We shift up at least one more gear (3:54) for the final verse, then the song(s?) finally take its leave.


Even the sublime 'Catherine Wheels' drifts off in a fog of distortion - the other side of 'Together Alone'. On tracks like the immense 'In My Command' (sadly, I can't find the studio version on YouTube), the band unleash an unprecedented - for them - level of guitar fury, as if finally releasing something they've had to somehow contain on all their previous albums. However, this is all still married - simultaneously - to precision vocal harmonies and beautiful tunes. During 'In My Command', the backing voices hold the key to this, as they soar behind the final chorus and hit a new height, providing a moment of exquisite release into the outro. (There's a lot of exquisite release on the album. 'Nails In My Feet' - again, a good internet version eludes me - builds for the whole song to a final stanza: "Total surrender / Your touch is so tender / Your skin is like water on a burning beach / And it brings me relief". The climactic point of the melody - where the tension finally overflows and relaxes - arrives at "brings me relief". Perfect.)

There are 13 tracks on 'Together Alone' and I could go on like this about them all. Every out-and-out rocker - such as 'Locked Out' - has a key harmonic moment that anchors it to the delicate pop song beneath the noise. Every ballad - such as 'Walking On The Spot' - has a strange chord or sonic twist that stops it being completely 'safe'. Listening to the record over and over again reveals more of these deft, inspirational touches. You really need to buy it - you really do - to uncover its riches.

Two jobs after leaving university, I started working at the library in a printing/packaging research institute. Sounds glamorous, I know, but don't be deceived. However, I got on very well with a colleague who would sometimes drive us both into the local town centre at lunchtime. I asked what music she listened to in the car, and opened the glove compartment. A cassette of 'Together Alone' toppled into my hand. Fortunately, since then, Mrs Specs and I have focused mainly on the 'together' part.