The Wigmore Hall continues to act as a kind of second home at the moment (I wish!), thanks to my ongoing mission to try and get to as many of its 'Complete Schubert Songs' recital series as possible - as well as the many additional delights it has to offer.

I do try to see some solo and chamber instrumental performances - and on occasion succeed - but they're currently spread a bit more thinly through my diary than they might be otherwise. The Schubert series continues until summer 2017, so my trips to the WH will be overwhelmingly song-based until then.

Not that I'm complaining! Two recent recitals in particular really brought home to me that even if the tools in use - voice and piano - stay the same from concert to concert, our experiences as attendees and listeners are almost infinitely varied and surprising.

The first featured the renowned US mezzo Susan Graham, accompanied by Malcolm Martineau. This duo are long-standing performance partners, with MM playing on most (I think) of SG's recital albums. Of the ones I own, a couple are single-composer surveys - Reynaldo Hahn (recorded with Roger Vignoles), Ned Rorem - but what really seems to fire the pair up is creating mixed, themed programmes that give SG the chance to genre-hop into jazz/cabaret mode and the listener an opportunity to discover something new. For example, the album 'Vixens, Virgins & Viragos' sets out its survey of womanhood from Purcell and Schubert through to Porter and Sondheim. Another favourite of mine is 'Un frisson français' which, as you might expect, is French song throughout but with one song per composer - giving it almost the feel of a mixtape that your enthusiast classical music pal might put together for you. (Which I suspect is how they approached it.) 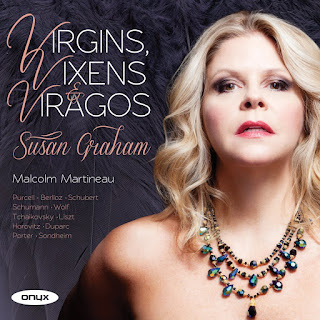 This flair for programming was still in evidence for the Wigmore recital (and I'm very pleased to learn there'll be a disc of this material to come). The evening was called 'Frauenliebe und -leben: Variations'. Some of you will recognise the title before the colon as a celebrated song-cycle by Schumann. It sets eight poems (from a longer sequence by the marvellously-named Adelbert von Chamisso) which run through key emotional moments in its female protagonist's life, from meeting her future husband through to their wedding, parenthood and, ultimately, his death.

Brief digression: both SG and Renée Fleming - who I got to hear perform the cycle last week, but perhaps that's for another post! - both felt the need to 'apologise' to some extent for it. Fleming explained that it was hugely popular for years but fell out of favour more recently because of the apparent subservience/abandonment/devotion/what-you-will shown by the woman towards the man. Yet the way it covers such a range of emotions in its compact form - conveyed with such glorious melodies - must have great appeal for a singer. It seems to be back: alongside SG and RF, Alice Coote and Dorothea Röschmann have both released lovely versions in recent months. Interesting, too, that Schumann's piano part attracts players who are more often soloists, with Christian Blackshaw accompanying AC, and Mitsuko Uchida with DR. RF had decided that audiences could cope with the idea that the attitude in the songs was of its time; SG also pointed out that the longer version of the story told in the full sequence of poems hinted that the wife was not quite as meek and compliant as the compressed version implied.

Anyway - SG and MM had devised their own way of expanding the cycle, and this is where the 'Variations' come in. Instead of performing the Schumann uninterrupted, they gathered a small group of songs around each Schumann lied that tied into it thematically. So, to give an example, the 'loving from afar' topic of the second song ('Er, der Herrlichtse von allen', or 'He, the most wonderful of all') was grouped with Johnny Dankworth's setting of 'Shall I compare thee to a summer's day?' - again, a jazz detour of sorts - alongside love songs from Fauré and Rangstrom. As SG gleefully announced, the programme ranged widely across countries, with the mezzo tackling eight languages by the end of the evening. Her voice is warm and luxurious, convincing in any tongue: I was particularly drawn to the two Spanish settings (songs by Turina and Granados). But given the duo's form, perhaps it isn't surprising that the perfomances really haunting my memory are French: as well as Debussy, Fauré and Poulenc all putting in an appearance, there was a heartrending version of 'Absence' from Berlioz's 'Les nuits d'été' - a work new to me but, I understand, far more commonly heard with orchestra... not that I would've known given MM's immaculate accompaniment.

I realise I've mentioned several times that SG talks to the audience. Before singing a note, she explained at length the concept of the recital, and even covered some 'housekeeping' - for example, when we should applaud. (That is, "when Malcolm stands up". Inevitably, when someone clapped out of place, we got a lovely bit of business where SG gestured ostentatiously towards MM, mouthing "He's. Still. Sitting. Down.")

I really enjoyed that aspect of the performance. There's no doubt that this was an 'event' recital, with SG radiating star power from the stage, but the rapport she established with the audience - not to mention that she already shares with MM - punctured any impulse towards hushed reverence and made for a properly 'inclusive' concert, largely characterised by warmth, humour and affection. When the serious songs came, they were played with appropriate gravitas and grace - and all the more affecting for it - but on balance, smiles prevailed. MM's approach is a huge part of this - able to play 'in character' as much as the singer, he is a superb communicator with the audience himself, and SG acknowledged this by more or less forcing him to take his own bow at the end.

(A rather lovely 'bootleg' recording of the duo playing a signature song, Hahn's 'A Chloris' - their relaxed performance style clear to see.)

And then ... for something completely different. I'd thought for some time that I would have to miss the great baritone Christian Gerhaher's contribution to the Complete Schubert series - it sold out before my WH booking was processed. Luckily, however, a return came up, so Cinders (me) could go to the ball (recital)!

CG is certainly a prominent operatic performer - his recent performance as Wozzeck is due to appear on DVD, he's in ROH's 'Tannhauser' shortly, and the only other time I'd heard him perform live was as Pelleas a few months ago at the Barbican. But I think it's fair to say he's something of a recital specialist, with Sony calling its recent box-set of his recordings - running to a handsome 13 discs of lieder - 'The Art of Song'. (And we are strictly talking about 'lieder' here - the entire set is German song, and in general, CG seems to stray only very rarely from his native tongue, at least on disc. Perhaps this is part of the reason he seems able to inhabit these songs so completely.)

Too recent for inclusion in the 'Art of Song' box was 'Nachtviolen', a 2014 album of Schubert lieder CG recorded with his regular recital accompanist, Gerold Huber. It's one of my favourite classical discs of recent years - the selection of songs helps to create the 'dark' mood hinted at by the title, and the production has an intimate, 'close-mic' feel that makes CG sound like he's singing right next to you, and your attentiveness rockets up accordingly. There are bursts of energy on the record - a pairing of 'Herbst' and 'Über Wildermann', for example, or the macabre 'Der Zwerg' - that feel all the more effective given the more 'hushed' nature of their surroundings. 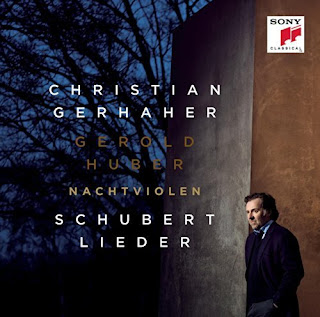 I dwell on the excellence of the album because I wasn't quite prepared for the recital programme - which was 'Nachtviolen', track by track, in order. Obviously, order is quite important in classical music (you don't re-arrange symphonic movements, say) but taking a CD and playing it in sequence is something I still associate unshakeably with the rock world - for example, Paul Simon playing all of 'Graceland' on an anniversary tour. It made me think that CG - and GH - must be aware that (a) it really is an unstoppably great album, and (b) they're exactly the right Schubert songs for CG at this time - don't mess with what works. The overall flow of the disc - its unified atmosphere with perfectly-judged gear changes - survived into the live performance intact, and yet I think this has as much to do with the duo's skilful stagecraft as their sound.

In many respects this was the polar opposite of the Graham/Martineau approach. CG wasn't in anyway aloof - he smiled, made eye contact, accepted applause. But he didn't say a word to us. And he hardly moved, either: it was all about the voice, which is - let's not be coy - beautiful. It's a deep but delicate caress. Completely uninterested, it seems, in knocking us into the back of the hall with a baritonal blast, CG somehow sang exactly how you'd want a living version of the album to be: I was back in row W, but he was projecting 'quietly', as if singing to me from the next seat. But then, of course, when the occasional fast or loud sections come along, live they carry that much more 'zing', and he nailed every such moment.

Interestingly, the visual effects - so to speak - came from GH, an expressive, mobile pianist who seems to play with his whole upper body, but never tips the balance into showboating theatrics. On the contrary, with a singer more than prepared to dial it down, he clearly has to play with a great deal of control himself - but after performing and recording together for so long, the two of them clearly have the dynamics comfortably worked out. It was a kind of perfection - not necessarily 100% pristine, but consummate, measured. Confident enough to hold something in reserve, allowing the revered Wigmore acoustic to do its job and wrap the melody around us.