I've been a music addict in one way or another for most of my life, as regular readers of the blog (thank you, darlings, thank you) have probably realised. But I'm still so early in my opera-going career that most of my visits are to see whatever work it is for the first time. This is enormously refreshing, and I admit probably ramps up the likelihood of my being knocked for six by a piece - but for all that, I don't think I've ever had the rug pulled from under my musical feet in quite the way this production did.

I went in 'cold' with no prior study or expectations at all. I knew that Gluck aimed to reform opera by reining in its excesses and reshaping it into something more streamlined and dramatically sound. (It seems he's occasionally compared to Wagner in this respect - although perhaps not the 'streamlined' bit. But Strauss also makes Gluck's influence plain with a namecheck in 'Capriccio', which itself brilliantly pits great artistic 'abstracts' - poetry and music - against each other by making them 'real' personas.) And I now know that this French version is a substantial revision of the Italian original that premiered just over a decade earlier - Gluck adapted it to fit Parisian tastes (that is, added more ballet, as well as making Orphée a tenor - while Orfeo was a castrato, poor chap). 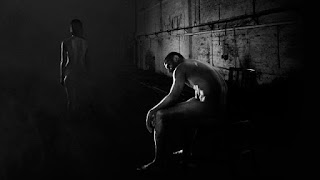 (The image is from the ROH poster. Features 100% more nudity than the production.)

I think that it's possible to actually include a spoiler for this opera - and it's still running - so I'll be a little circumspect. If you know the myth, you (more or less) know the story: master musician Orphée grieves for his late, beloved wife, Eurydice, to the point of madness. Amour appears, and allows him to journey to the underworld to collect the Mrs, as long as he meets a number of awkward conditions. 1: He must play his lyre winningly enough to get the Furies to let him in. 2: He cannot look at Eurydice until they're back up top, but 3: He can't tell her why. Orphée manages to carry all this off until the fateful moment when he can't stand it any longer and turns round to face his wife. All is lost. [Pause.] Or is it?

I think I rather fell for this ROH production partly because.... although I was clearly watching an opera, it seemed to be assembled exclusively from other musical artforms - part concert, part dance, part oratorio. I suppose largely because most productions are 'revivals' (by which I just mean 'old' operas that play over and over, not necessarily repeat stagings), then the focus of the evening is frequently on the stars and their presence/performance, then perhaps the director's interpretation, then the playing - and so on. But this time, I found myself thinking this whole sequence through backwards.

The true star of the enterprise is undoubtedly Gluck, channelled through living legend John Eliot Gardiner, with his own band: the Monteverdi Choir and the English Baroque Soloists. With more emphasis shifted to ballet music, there just seems to be an infinite well of this glorious, cascading score - and it's hard to imagine any ensembles - vocal or instrumental - better suited to bringing it to life than this. As the EBS name would suggest, it's no wonder that when particular instruments took centre stage - flute for the 'Dance of the Blessed Spirits', harp for Orphée's lyre - the music soared even higher.

The production acknowledges this, with the orchestra right there in the middle of the stage. Not only that, the musicians are really the first participants to highlight what this staging is really about: movement. Before our eyes, the entire platform bearing Gardiner et al rises and falls - and the effect is to give them a 'role' in the opera (their position directs us - as when they literally sink, along with the action, into Hades).

Accordingly, next in our hierarchy come the dancers: the Hofesh Schecter Company. With Parisian-level instrumental passages, they are on the go for a long time - but we the audience don't notice because there are so many different visual treats to look at. The choreography is at once both ballet and contemporary dance - broadly, it seems, with the more classical moves performed by the 'blessed spirits', with the more restless and tormented characters from the underworld throwing their shapes in a more modern, agitated, combative style.

It seems almost cruel, then, to mention the soloists last. There are only three of them - Juan Diego Flórez and Lucy Crowe in the title roles, with Amanda Forsythe as Amour - and they all made individual, striking impressions. JDF caught the right balance between wracked and determined, and AF slinky and persuasive. I thought LC was particularly good - her time singing onstage is inevitably quite brief, but her solo 'Cet asile' sent shivers up and down my spine ... not to mention her ability to sing beautifully while acting her confusion and resentment so convincingly. 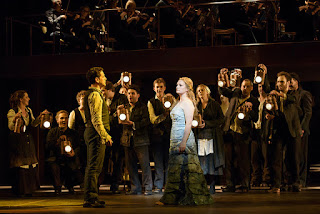 But these distinct personalities remain subordinate to the perpetual motion of the production. It's worth noting that the choreography does not end with the dancers. The Monteverdi Choir blended with their more restless counterparts in a well-judged series of lower-key moves - with no impact whatsoever on their stunning rendition of Gluck's sublime writing for chorus. But especially excellent was the physical acting of JDF and LC. It must be harder than it looks to direct this story (in whatever form) since all the interaction between the two leads must take place without Orphée once looking directly at Euryidice. The pair managed this superbly, executing duets, arguments, even embraces and caresses, without a single misdirected glance from JDF until, of course, the one he must inevitably make.

Even light is made to travel in line with the production's whims - against an otherwise muted backdrop (again, the staging's brilliant complexity is all in its movement, creating split levels and tunnels that keep Hades for the most part a dark secret), a beam is fired through a hole in a false floor, diffused into a pool of paradise, or poignantly contained in a flaming effigy. Very appropriate for an evening I found illuminating in so many other ways too.