I try to hear as many of my favourite performers as possible whenever they play London's Wigmore Hall - surely one of the planet's finest venues for classical song and chamber music. But in doing so, I now realise that I've now enjoyed a run of extraordinary concerts with barely pause for reflection, let alone for writing them up.

So, forgive me as I try to put that partly right now with a whistle-stop tour of some recent song recital highlights. Of the four events I want to cover, the first three featured master accompanist Julius Drake on piano. It's a real testament to his skill and sensitivity, I think, that while his playing is so stylish and full of its own character, at the same time he always homes in on each singer's particular characteristics and supports whatever it is that makes them distinctive. I always look forward to hearing him.

Bass-baritone Gerald Finley performed an intriguing selection of songs broadly connected with melancholy and death. (I believe the programme must have been devised last year and, like many other 2014 musical endeavours, looked back to 100 years previously; some of what we heard here dealt directly with war themes.) As sometimes happens when the lyrics are the unifying feature, we got to hear an exciting range of composers and styles. In a way, the first half was as much comfort zone as war zone, featuring Mozart, Beethoven and Brahms.

But, thrillingly, the concert saved some of its more challenging moments for part two. A section of Walt Whitman settings, starting with some Vaughan Williams, closed with a searing rendition of Ned Rorem's 'War Scenes'. These five songs do not adapt the poetry, but instead some of Whitman's Civil War reportage. GF's voice can be so warm and enveloping, but here you experience full-on what a great opera-actor he is - I was reminded of his epic suffering as Amfortas in the recent Royal Opera House production of 'Parsifal', but of course I was up in the gods then. In the Wigmore Hall, this emotion is laid bare right in front of you. The insane humour that sometimes accompanies dark subject matter is a recurrent feature - back in the first half, Finley acted out Goethe's aristocrats in flea-infested clothes, and the finale - an Ives setting of a folksong calledd 'Charlie Rutlage', allowed GF to adopt a Wild-West twang as the doomed cowboy hurtles (with an appealingly crazed JD hurtling along with him) towards his fatal accident. A handsome and thought-provoking concert. 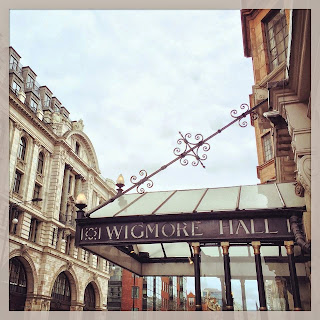 I think the mezzo-soprano Alice Coote is one of opera's most singular (or perhaps most plural!) figures: she's one of the artform's great communicators and yet one of its most gifted chameleons. She is arguably most renowned for playing the major 'trouser' roles - that is, male parts taken by female singers - and in the last few days wrote a superb analysis for the Guardian on the effect this has on her, both on and offstage (you can find it here). I found the article particularly illuminating because I'm more used to seeing AC on the recital platform, and this sometimes perplexing, sometimes playful androgyny is all there. While there are no real rules as such for who should perform which art songs, she has taken the opportunity on the Wigmore stage to tackle some of the great song cycles commonly - but not exclusively - associated with male voices ('Winterreise', 'Dichterliebe') and made them wholly hers. Even her distinctive stage outfits - glorious patterned robes over black trousers - seem to contribute to this ability to present both sides of the sexual divide in one interpretation.

Her most recent recital at WH was an all-French programme that brought all of AC's gifts for melancholy and mischief to the fore: high points for me included the chance to hear songs I hadn't come across by Hahn, Satie and Saint-Saens. But what I think sealed the recital's genius was AC - and JD - both seeming to walk the tightrope between 'chanson' and 'melodie' (ie - massively simplistically - French popular song versus French art song) and how some of these songs are only one flight up the stairs from classical cabaret. From the lilting 'Serenade' by Gounod to the lounge-nihilism of Poulenc's 'Hotel': at times JD was finding an almost blues feel to support AC's wholly involving movements and expressions - not to mention her vocal colours from wracked to rapturous. And to cap it all, this seemingly supernatural ability to be exactly what the songs need, to somehow simultaneously suggest anything from lounge lizard to breathy chanteuse, brought these renditions close to perfection.

(Don't miss Alice Coote's new CD of French song on Hyperion, 'L'heure exquise', and you can hear what I'm going on about!)

Only last night, Ian Bostridge gave what I believe is the last concert in a series of recitals (all with JD) exploring some of Schubert's 'stand-alone' lieder away from the famous song cycles. This was the first one I actually made it to in person, but luckily they've all been recorded for Wigmore's own label, and the first CD was one of my highlights of last year. Listening to it more and more, it's now one of my favourite CDs full-stop and possibly one of *the* great live albums (in any genre). So, I was expecting this to be good!

And I was right! I've written about IB in some detail before - but to re-cap, I think the main reason I find him so magnificent in Schubert lieder in particular (and I'm a huge fan in general) is his ability to 'live' it. His voice is powerful, but at the same time somehow angular, pointed, hitting the notes like a missile. To return to stage presentation: both he and JD perform in suits and open necked shirts; in a classical context, that's almost a deliberate 'nothing to see here'. But there is. Although he never plans it as such (as we heard in an interview after a performance of 'Winterreise' at the Barbican), he uses his height and wiry frame - whether at full stretch or bent double - and what appears to be a genuinely haunted look to express physically everything that's going on vocally. Finding a focal point - a knob on the piano lid - IB grips it with his right hand and much of the time uses it visually as a pivot, seemingly hanging on to the instrument for dear life and deriving some charge from it, while JD provides the power. Masters of mood, they barely acknowledge the infrequent applause breaks, IB staring at JD's hands, waiting for the next song to begin and release him into performing it. I sometimes think that if Schubert could hear IB - whatever the composer's tastes or technical opinions - he'd be able to say, "Yes - that's exactly how I felt when I wrote it." 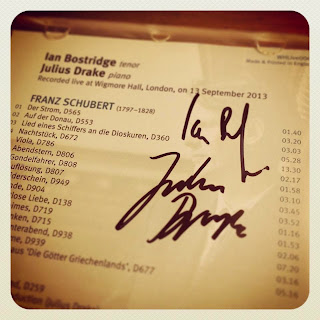 Finally, a concert of Schumann and Berg, given by soprano Dorothea Roschmann, accompanied by Mitsuko Uchida. This sounded like being such a strange and wonderful thing, I wasn't entirely convinced it would even happen until I turned up. DR's recent recital CD, 'Portraits' (with Malcolm Martineau) is an addictive listen, another great disc from last year. This recital is also destined to appear on CD, recorded by Decca (MU's label home) - which is excellent news, as it was beautiful throughout, and I can't wait to hear it again.

Actually being there was magical. Roschmann's voice has a beautiful purity - like 'Portraits', in fact, the songs performed are all in her native German - so there is seemingly no barrier to her making the spectacular sound almost effortless. It's interesting to compare performing styles - in comparison to Alice Coote's unmistakable connection with the audience or Ian Bostridge's near-Method extremity, Roschmann is almost a regal presence, comparatively still, formal, with everything in the voice. I felt that if you could draw a split-screen down the centre of the stage, DR could almost convince you were watching quite an old-school performance some while ago, while on the other side, there's a 'pianist from the future', Mitsuko Uchida simply exuding cool and good vibes, singing along under her breath. (I think MU was also wearing exactly the same 'trademark' outfit she wore when I once saw her performing a Beethoven concerto at the Proms. It stuck in my mind, as mid-movement, when the heat in the Royal Albert Hall became too much, she flung her jacket off and chucked it on the floor. The playing was so exhilarating that at the climax she stopped playing and aimed a playful 'kung fu' fist at the conductor, essentially a remote high-five. That's how cool Mitsuko Uchida is.)

Also - it felt relevant and important to be listening to two women. Readers with wider knowledge than me will perhaps tell me differently - but I think I've yet to come across another recital (of voice and piano) on CD or in concert by a female duo. I wonder if the combination lent the extra 'connection' between the artists that I thought I could hear. Certainly MU - who of course commands the stage more often as a soloist - is an extremely watchful accompanist; I lost track of how often her eyes would dart to DR to match her next move. Two of her most recent solo CDs have been devoted to Schumann, so perhaps she's still very much tuned into his soundworld; her playing is expressive and full of personality, without ever once threatening to upset the balance between her and DR. Immaculate.

Ah well. I'd better stop there. Back at Wigmore Hall tomorrow....