Specs and violence: how to 'reduce' disruptive audiences

I've been to several sublime concerts and operas in recent weeks - and one thing I've never lost since I started going to this sort of thing regularly is a sense of how privileged I am to be there. Obviously, I've paid, so I am 'entitled' to go - but that's not the point. Great performances remind me of my incredible good fortune, simply having the opportunity to hear these musicians and artists giving their best to create such unforgettable experiences for the rest of us.

But one thing I've noticed - and it's difficult to escape that idea of entitlement when thinking about it - is an increasing tendency for audiences to treat whichever auditorium they're in as their front room. I know it's a contentious issue. And I know that being aware of this behaviour hardly makes me Sherlock Holmes - others have written or complained about it, I've touched on it myself before, and we won't be the first or the last.

I think Keith Jarrett was one of the first performers to really have a good old moan about this, to the point where he would berate audiences about coughing, in particular. The trouble is, because KJ can be a bit pompous and arrogant, I think many people took this as just pomposity and arrogance. I did hear him once, linking coughing to a kind of hive boredom or lack of attention - and the temptation is to respond, 'well, who's to blame for that, Keith?' (It goes without saying, I hope, that his performance was beautiful and utterly riveting.)

I actually think KJ is giving the phenomenon more psychological complexity than it deserves. I think people are just thoughtless. The ruder society gets, the ruder audiences get. It isn't just coughing - there's the talking, eating, drinking, rustling, barging... and I think my critical tipping point came during a recent Royal Opera House performance where - as much as I loved the cast and production - the shine was taken off the evening by the coughing, with barely 30 seconds of uninterrupted music passing without some hacking, consumptive punctuation mark intruding on the score. (Because it's never a gentle clearing of the throat, a quiet 'ahem' - it's always a colossal roar. Why does no-one ever attempt simply to stifle it, even a bit? It's nothing to do with how ill they are. If they're very poorly, they should be at home. It's because they don't care where they are - they're going to do what they bloody well like.) One ailing attendee sneezed so hard, I think they actually moved back several rows - this picture shows the auditorium immediately afterwards: 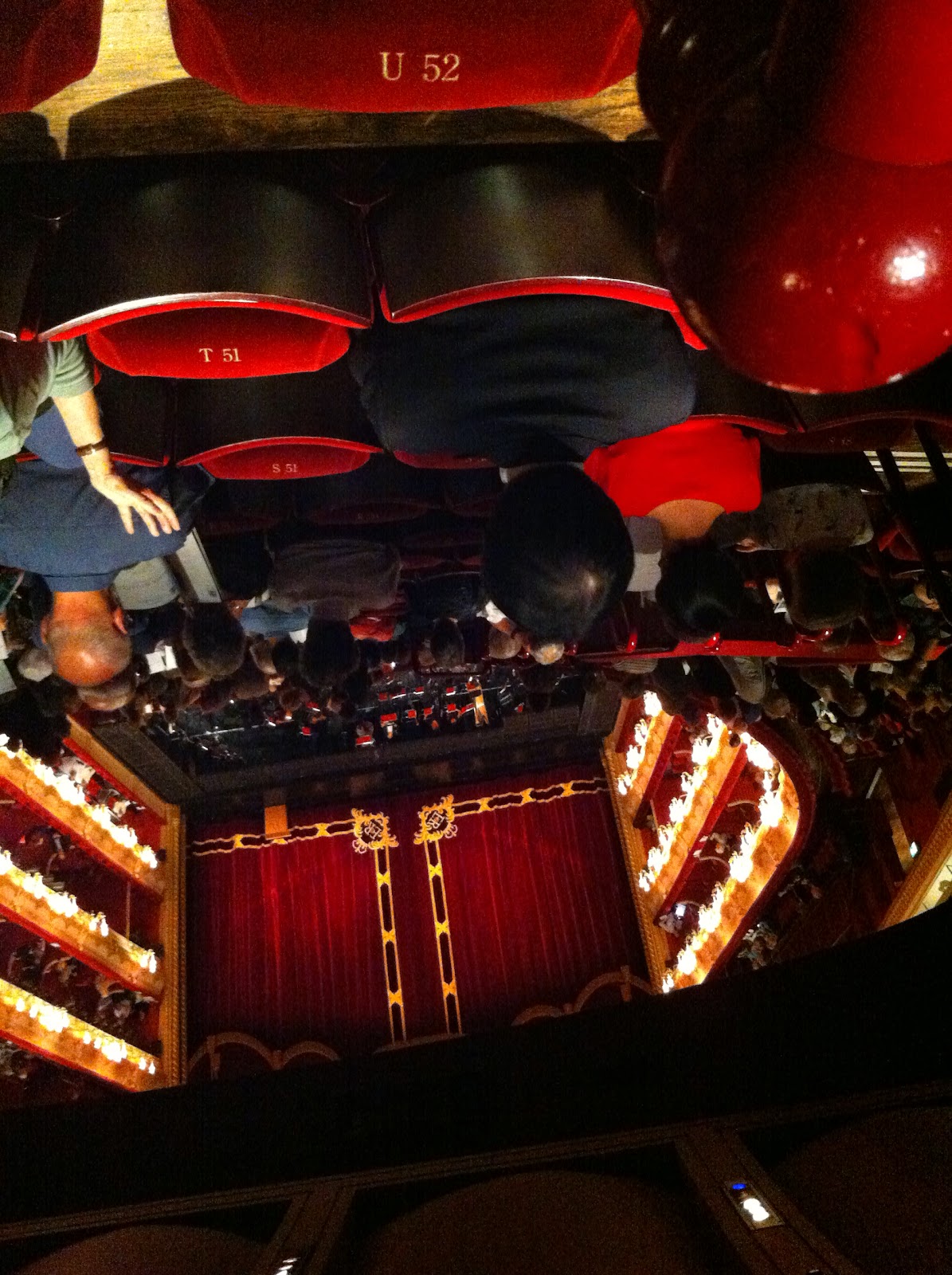 So, I return to this vexed subject at the point where I feel driven to distraction. And I'm particularly saddened by the feeling that the Royal Opera House is where this problem is at its most damaging - certainly, it's where I've had my worst audience experiences. (I'll return to how other venues tackle it later.) Fortunately, the ROH is also perhaps the building best equipped to deal in a zero tolerance fashion with these so-called opera lovers, and it would only take a low-key intervention from Q Division to provide them with all the state-of-the-art weaponry they would need to get rid of the problem once and for all. I had hoped never to descend into the underground bunker beneath chez Specs and retrieve these papers from the safe, but extreme situations demand extreme responses. Here is my 6-step plan for removing noisy audience members with minimum disruption.

1: Get them - sorry, 'identify' them - before they come in. Train CCTV on all the entrances, making it easy to spot if anyone is coughing or raising their hand to their mouth as they approach. When they are fully enclosed in the revolving door, stop it moving. Then activate the new motor that spins it round at several hundred rpm, ultimately flinging the saboteur back out into the open, where they will describe a parabola across either Bow Street or Covent Garden. I realise this may involve innocent casualties also using the door, but it's an occupational hazard. Let's not forget, they'll have already paid for their ticket anyway, so are dispensible.

2: If any of them make it past the revolving door, specially-trained ticket-checkers will be on duty at the entrance by the box office, looking and listening out for any signs of throat-clearing, umbrella or walking stick brandishing, or complete inability to do anything without PASSING COMMENT at the TOP of one's VOICE. They will then show these people to the top of the steps down to the Linbury Studio Theatre, muttering something about 'a new shortcut'. Once the targets - sorry, 'patrons' - start the descent, the stairs quickly rotate out of existence to form a smooth chute. The offenders then glide through a secret underground tunnel to the Coliseum, where they will become *ahem* 'extras' in English National Opera's production of 'Sweeney Todd'.

3: Offer throat lozenges to anyone already coughing. As they stoop slightly to take one, clip them twice round the ear, saying, 'Don't. Cough.'

4: Ticket-checkers must also conduct bag and body searches for any boiled sweets, or other consumables nestling in high-rustle paper or plastic. These sweets are to be confiscated and passed to the cloakroom attendants. These members of staff should be so high on sugar and E-numbers by the end of the performance that they pass judgement on visitor style and act accordingly. In this way, a happy side-effect will be to eliminate some of the poshness and elitism opera is so unfairly saddled with these days. "I don't think I should return this coat to you, sir. I really don't." "Madam, on your behalf, we decided your appalling bag was unattended, and duly detonated it. I'm sure you understand."

5: It's possible that even at this stage, some perpetrators - sorry, 'guests' - will still reach the auditorium. Ushers are to hand out free tissues, laced mildly with chloroform. After a few epic sneezes, the saboteur will succumb to gentle - and thankfully, peaceful - oblivion.

6: Ushers must also be vigilant for anyone still causing disturbances not just by hacking or unwrapping, but also choosing the quietest moments to fling their programme on the floor, punt their stick along the aisle, rummage in their bag because it's 'less annoying to check something once the music starts', or start a conversation. These people are to be offered a free interval drink on the terrace. When they are out there, lock the terrace door. Optional: release the snakes.

As you can see, I'm not an unreasonable man. For example, I accept that the ushers and cloakroom staff will need small pay increases to reflect their extra duties.

Let me move back to my serious keyboard. Of course I should stress that the Royal Opera House is not the only place saddled with more than its fair share of inconsiderate, selfish audiences. They're everywhere: South Bank, Barbican, Wigmore Hall... but the Wigmore Hall is a really excellent example to take as a comparison.

The first thing you see when you enter the auditorium is a huge sign on stage, showing a mobile phone with a line through it. The programme is a small masterclass in etiquette - for example, if you are following song words, it instructs you to only turn the page once the song has finished, and reminds you to check your phone again at the end of the interval. Crucially, it tells you - in black and white - to stifle coughs. It makes a point of saying how distracting it is. (And they really do sell lozenges for potential hackers.) Before most performances, one of the Hall's team takes the stage and repeats the cough warning aloud. By keeping these warnings light and jovial (take note, Jarrett), and trusting in the fact that the WH has a 'fanbase' of sorts, regular punters who like to come to many concerts, the Hall can hammer these points home without causing reverse offence.

They are saying: you are not passive in this. You may well have a cough, but you're not powerless to moderate it. Don't open your Werthers or wave your programme around like a child. You are NOT at home now, and until you pay the rental - rather than just the ticket - price, you don't have the right to treat it as such. And because people are then embarrassed to behave like spoilt brats, they largely don't - resulting in a noticeably quieter and more attentive atmosphere than elsewhere.

I see no reason why the Royal Opera House - or any other similarly afflicted venue - cannot make a more explicit challenge to their audiences in exactly the same way. Those that are left after my new measures have been implemented, anyway.