In this post, I'm writing about the production of Francis Poulenc's 'Dialogues des Carmelites', which I saw last night at the Royal Opera House, London. So, a quick 'spoiler warning' to start. 'Carmelites' is famous for (among other things) its ending - one of the most powerful in all opera - so I'll talk about it freely in this post. Many opera-goers are likely to be familiar with it, and knowing what's coming does little or nothing to dilute its impact. That said, if you're in with a chance of seeing or hearing it before discovering the climax then please do so! Leave this place immediately (my next paragraph is a plot summary) - but please come back afterwards... 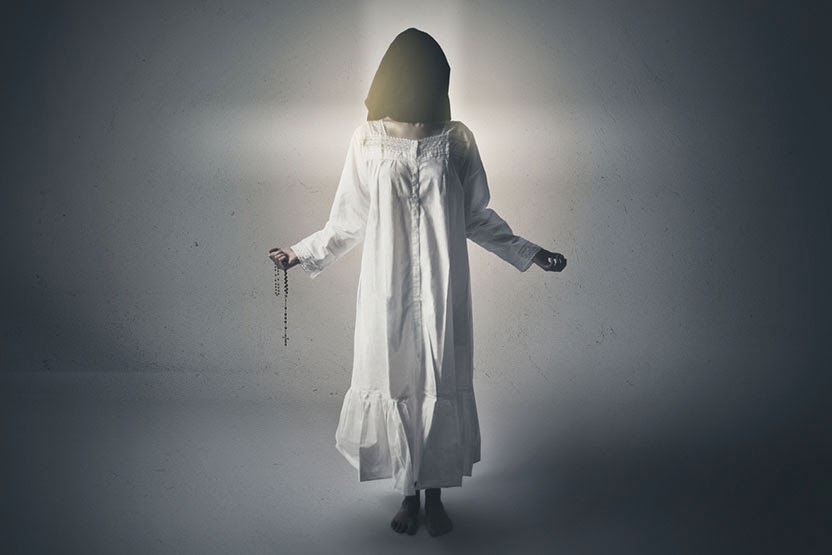 (This image is the graphic used on the Royal Opera House website.)

First - to cover the bare bones of the story. France, around 1790. Blanche de la Force is a fragile young woman who decides to leave her aristocratic home and retreat from the world by joining the Carmelite order. While she seems to achieve a certain level of inner peace, life with the nuns is not without its peculiar terrors. One of the sisters, Constance, dreams that she will die young, together with Blanche, on the same day. And the terminally-ill Mother Superior - after charging senior nun Mother Marie to keep a careful eye on Blanche - renounces God in her dying moments for abandoning her, with Blanche and Marie still looking on. As revolution gathers pace, the plot surges forward. Blanche's brother tries - and fails - to get her to leave for her own safety, and eventually visiting officials tell the nuns that the order will be dissolved. The Carmelites vow to face martyrdom if necessary, but Blanche loses her nerve and flees. Marie tracks her down to her old home, and finds her working there as a servant (with her father already lost to the guillotine). She cannot persuade her to rejoin the rest of the nuns in prison, so gives her the address of a safe-house. Later, the order's chaplain persuades Marie herself to keep away, as God must have decided to spare her. However, as the nuns leave their cell and go to their execution one by one, Blanche rejoins them at the last minute, turning Constance's dream into a prophecy.

The opera has its roots in fact - there was a mass execution of Carmelite nuns in 1794 - as well as a novel and play. However, Poulenc fashioned the libretto from the play himself, so must have exercised total control over what to include or omit, and how to pace not just the music, but the plot. The opera is something of a structural marvel: three acts of four scenes (or 'tableaux') each, giving a 'triptych'-like balance.

The middle act is like a pivot, where essentially the tide of events turns against the nuns and the outside world invades the monastery. The outer acts are more about character, and work like 'reverse-mirrors' of each other. The old Mother Superior - previously a tower of strength - loses her faith at the moment of death, and Act 1 closes in defeat and horror. At the climax of Act 3, Blanche goes to meet her end after finding her faith. Arguably, the phenomenal power of the opera's closing moments comes from this almost impossible demand on the audience to see the spiritual victory in the midst of such merciless tragedy.

Well - that, and the extraordinary score. As the title suggests, there is not an excess of physical action, but conversations and argument drive the story forward. Poulenc - manipulating words and music - underpins the philosophical and religious discussions with melodies and rhythms making extraordinary matches for speech patterns: one scene that especially sticks in my mind is the confrontation between Blanche and her brother, with his urgent, chattering persuasion meeting the relatively serene parry of her rebuttals. The incredible death scene of the prioress (fantastic performance from Deborah Polaski) - is as demanding a solo as you might expect, somehow communicating exquisite beauty and terrible pain simultaneously. And given the subject matter, I ought to mention the way Poulenc absorbs sacred/choral music into the whole, its stately progress in seamless alignment with the relentless march of the opera towards that ending.

The opera calls for the nuns to die while singing the hymn 'Salve Regina'. Poulenc sets it to a glorious, devotional melody that glides over a sinister, funereal beat. The sound of the guillotine - written into the score - slices across the tune (it's deliberately out of step with the hymn's rhythm, so almost impossible to anticipate) as each nun is cut off, mid-song, in turn. I remember one 'chop' in particular being followed by the most alluring harp flourish, and getting the unmistakeable shudder of 'wrongness' down my spine. The scene really is one of those genuine musical and theatrical high watermarks: audacious, unsettling, moving, strangely exhilarating (there's always a part of you - even if the rest of you is reeling, sobbing, slack-jawed - that just wants to sit back and enjoy it for its brilliance) and incontestably beautiful.

Staging this scene must always present a challenge. On YouTube, you can find versions where the nuns literally climb a scaffold which leads off-stage, or where black gauze falls in front of each one as their voice drops away. This production by Robert Carsen has already been acclaimed elsewhere before coming to London. His elegant and sparse setting for the whole opera - barely any scenery, the characters moving props on and off the stage, and creative lighting marking points of utter stillness as a single character or image moves us from one scene to the next - is perfect for the ending. The nuns stand in formation, making modest but choreographed hand gestures as they sing, and as each one dies, sinks slowly to the ground, lies on her back and stretches her arms out to make the cross. From our high view up in the Amphitheatre, I think we really benefited from the imagery and patterns Carsen has managed to create on the stage. And all through the opera, the ending is presaged: as we file in, the stage is visible (rather than behind the curtain) covered in perfectly laid out habits; and the nuns surround the dying prioress, lying face down in the crucifix shape in silent prayer.

Such an inventive production really becomes an opera so rich in ideas. Poulenc was a man of faith, although not without conflicts. He was openly homosexual, although it's worth bearing in mind that in France, attitudes were considerably more relaxed than over here in the UK. We didn't even legalise it (for men) until the late sixties. (The opera dates from 1956.) I was intrigued to discover that in France, gay sex effectively became legit during... well, there's a coincidence - the French Revolution.

But - Poulenc suffered a nervous breakdown trying to complete 'Carmelites' and it seems difficult to separate this from a kind of crisis and re-adoption of his Catholic beliefs. Like those horror stories (from 'The Turn of the Screw' - filmed as 'The Innocents' - to 'The Omen') where it could all be 'real', or in the protagonist's mind.... it seems to me that 'Carmelites' can be read as much as a humanist opera as a religious one. It wades through some very murky psychological waters.

For example, two of the nuns arguably have 'death wishes'. Blanche (sung with great sensitivity by Sally Matthews) is in a state of perpetual fear. She is frightened of the outside world, then frightened of the inner one. She is scared of both living and dying. We find out in Act 1 that Blanche's mother died in childbirth and it becomes more plausible that Blanche feels that she is in some way defective or cursed. While Sister Constance openly desires an early death and takes the rather odd decision to tell Blanche about her dream that they would both die young, together. Bewilderingly, it is then Constance who appears to be the initial lone voice against the martyrdom vow, but she soon changes her mind. (It is tempting to wonder if she is protecting Blanche, who skedaddles immediately afterwards. Constance says the chaplain will confirm her as the dissenter, but in truth she barely seems to let the poor bloke get a word in edgeways.) We never see Blanche's 'moment of clarity' when she conquers her terror to join Constance serenely at the guillotine, so we can only guess at the magnetic effect Constance's eagerness to die might have on the already unstable Blanche.

One character on an altogether different path is Marie. She seems to spend the opera escaping God's clutches. A possible contender for the Mother Superior role, she is not in fact appointed. Searching for Blanche at the crucial moment of the nuns' arrest, she never actually returns to share their fate - even though Blanche does exactly that. Marie is practical, sensible and dynamic, but as devout as the others. So it's interesting that her survival, and the chaplain's suggestion that she has been spared by God for a reason (presumably to achieve some further good) raises a question mark over whether the nuns' martyrdom is in fact right or necessary.

Despite this undercurrent of doubt I can't help suspecting, the opera perfectly sustains a fully religious interpretation. This 'dual' nature also seems to be reflected in the push and pull between the sacred echo of early music and the secular, speech-mimicking dramatic 'Dialogues' between the characters. No wonder it's a work of such haunting, deathless genius.

I was in two minds about including this video of the ending from YouTube. (It's the same production from the Teatro alla Scala, around ten years ago.) However, I reasoned that you could just go off and find it anyway, if you wanted to! - plus, I think if any scene will persuade you to seek out the opera in full, it is this. Imagine watching this live, after spending two hours in these characters' company. It is utterly remarkable.